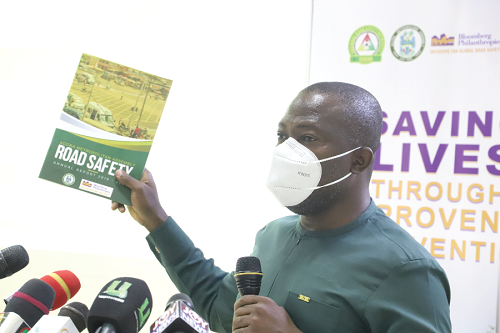 The Accra Metropolitan Assembly (AMA) is to intensify collaboration with the police to reduce road crashes in the metropolis.

The Metropolitan Chief Executive (MCE), Mr Mohammed Adjei Sowah, who made this known, said the AMA, in partnership with the Bloomberg Philanthropies Initiative for Global Road Safety (BIGRS), had trained over 300 police personnel and donated policing items to the Motor Transport and Traffic Directorate (MTTD) to aid enforcement.

Additionally, he said the assembly and the police had undertaken a speeding mass campaign and several mini-campaigns that saw the reduction of speed within the metropolis.

“We have also launched the road safety strategy and the pedestrians’ road safety action plan. These documents have guided the city’s road safety planning and implementation towards saving human lives,” he said.

Mr Sowah stated these at the launch of the 2020 Road Safety Annual Report prepared by the AMA in partnership with BIGRS last Wednesday in Accra.

The data were outsourced from police crash reports and observational studies on road injury risk factors.

He said the global estimates showed that about 3,700 road traffic deaths happened daily.

In addition, approximately 55, 000 to 137, 000 people suffered non-fatal injuries, with many suffering disabilities due to the severity of the injuries, Mr Sowah indicated.

Against that backdrop, Mr Sowah noted that it had become necessary for stakeholders to take drastic action to put measures in place to meet city, national and global targets set to save lives of roads.

He said the findings from the report should inform continuous interventions to reduce crash-related deaths and injuries in the city and guide activities of stakeholders in road safety to deliver on their mandate.

“I expect the contributions at the city level to augment national efforts to prioritise road safety. I hope the strategic actions taken by AMA to reduce road deaths and injuries will encourage stakeholders at the local and national level to continue supporting these efforts,” Mr Sowah said.

He said vulnerable road users such as pedestrians, motorcyclists and cyclists made up 76 per cent of total deaths in 2019 and 85 per cent in 2020.

He said males accounted for more than 65 per cent of road traffic deaths and serious injuries in 2019 and 2020 while the highest proportion of deaths in both years was recorded among those aged 30 to 39 years.

He said findings from the road injury risk factor observational studies showed a 47 prevalence of speeding in Accra in 2020 while correct helmet use among motorcycle drivers dropped from 75 per cent in 2019 to 69 per cent in 2020.

As a result of the increasing figure, he said some action plans were being implemented to improve road safety in Accra.

Some, he said, included a collaboration with the National Road Safety Authority (NRSA) to train road safety inspectors to conduct specific road inscriptions and make recommendations for improvement.

He said the campaign which targeted male drivers between 18 and 29 reached about one million dwellers in Accra and had a positive impact on its audience.