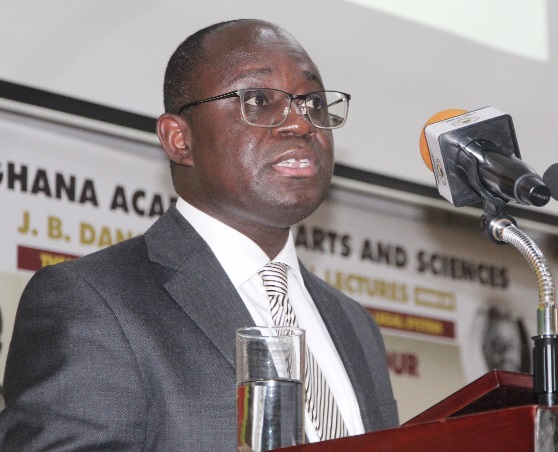 Prof. Richard Frimpong Oppong, Professor of Law at the California Western School of Law, San Diego, USA, lecturing participants on digitalisation and the future of the Ghana legal system at the Ghana Academy of Arts and Sciences. Picture: ESTHER ADJEI Follow @Graphicgh

A Professor of Law has called on the General Legal Council (GLC) and the Ghana Bar Association (GBA) to revise the restrictions on advertising legal services.

Prof. Richard Oppong, who lectures at the San Diego School of Law in the USA, said the current restrictions imposed on advertising legal services must be changed, with the view to adopting a regime that better mediated the interest of access to justice.

"Some have challenged the existing restrictions as anachronistic in this digital age, representing an unconstitutional limitation on freedom of speech and perpetuating economic inefficiency in the market for legal services," he said.

The Law Professor made the call when he delivered a lecture at this year's J.B. Danquah Memorial Lectures in Accra last Monday on the topic:

This year's series of lectures are being organised on the theme: “Digitisation and the future of the Ghana legal system”, under the auspices of the Ghana Academy of Arts and Sciences (GAAS).

The memorial lectures were instituted in 1968 in memory of Dr J.B. Danquah, a foundation member of the GAAS, who died in prison in February 1965.

The lecture series were originally restricted to fields such as Law, History, Philosophy and Literature, disciplines whose study occupied the greater part of Dr Danquah's academic pursuits.

This year, three separate lectures have been scheduled, with the first, delivered by Prof. Oppong last Monday, examining access to justice and exploring the leveraging of digital technologies to create new pathways to justice in Ghana.

Some notable personalities who had delivered similar lectures in the past included the late Prof. Alex A. Kwapong, Dr Emmanuel Evans-Anfom and Prof. Albert Adu-Boahen.

Prof. Oppong, who was elected a Fellow of the GAAS in 2016, noted that restricting the advertising of legal services prevented people from easily finding affordable legal help to address the issues that they faced, noting that in some of the issues, people might not even be aware that a legal remedy existed.

“For example, thousands of Ghanaians die or are injured on our roads and suffer workplace injuries or medical negligence every year, and because of these accidents and oversights families are often torn apart and forced to fend for themselves without breadwinners.

“This happens because they have no idea that they can seek legal redress or they simply cannot afford the services. However, if legal services are advertised, it will help people use the law to seek the justice they deserve,” he explained.

He said a cursory look at published court judgements would reveal that very few of personal injury torts (legal wrongs) found their way to courts for redress.

To improve access to justice in the country, he said, there was the need to make information on legal rights and obligations publicly available.

"I argue that access to justice suffers where lawyers cannot directly or freely speak to the public about the legal services that they provide or the legal options that are available in response to problems confronting the public," he said.

Prof. Oppong said the GLC must, therefore, improve knowledge of legal rights and legal processes because one significant barrier faced by anyone attempting to resolve justice problems was the lack of knowledge about legal rights and the system and the available resources to support individuals.

Prof. Oppong also stressed the need for investment in technologies aimed at making justice more accessible to the public.

The government and the GBA, he indicated, had the responsibility to help develop digital solutions towards that end, while the legal system embrace digital technologies that could help it provide better justice for citizens.

"The use of digital technology to overcome social ills has been well documented and Ghana is not alien to this. The expansion of financial inclusion through digital technologies demonstrates the potential for such technologies to transform or enhance access to justice," he said.

The Law Professor also called on the GBA, the GLC and the Minister of Justice to jointly work and commission a study into access to justice in Ghana.

He said the commission that would be instituted must, among others, examine the use of digital technologies to enhance access to justice and consider the prospect of adopting an interest in a lawyers' trust account scheme to fund access to justice initiatives in the country.

In embracing digital technologies to improve access to justice, Prof. Oppong said, there could be some risks, which should be articulated and guarded against.

He said, for example, that there was a real risk of excluding the digitally illiterate and digitally under-resourced, including those who did not have access to relevant facilities, such as the Internet.

He said the risk derived from a broader recognition that the socio-economic factors affecting citizens also affected their respective abilities to benefit from initiatives designed to improve access to justice.