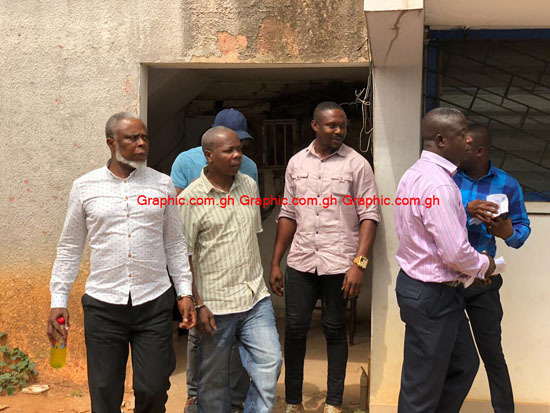 The Accra High Court hearing the case of the 10 persons accused of plotting to overthrow the government has issued a bench warrant for the arrest of the only female, Warrant Officer II (WOII) Esther Saan Dekuwine for failing to appear in court.

This was after counsel for the accused person, Lamtiig Apanga failed to substantiate claims that his client had been admitted to a hospital.

The three-member panel of the court, presided over by Justices Afia Serwah Asare-Botwe, issued the bench warrant because the accused person was unable to provide an excuse duty to buttress her absence.

The court which has Justices Hafisata Amaleboba and Stephen Oppong held that the absence of the accused person was without a justifiable excuse and, therefore, issued a bench warrant for her arrest, to appear before the Court.

Again, the court said, if the accused person is arrested on a day it is not available for sitting, the registrar of the Court should be notified of the development.

Meanwhile, the medical doctor of the Ogbojo Polyclinic, who issued an excused duty to Bright Alan Debrah Ofosu also appeared in court following a subpoena issued by the court on November 9, 2021, to explain if indeed Ofosu was unwell.

Appearing before the court on November 10, 2021, the medical doctor, Dr Joel Tetteh Padi, presented evidence in Court, to show that the accused person was indeed unwell and needed some time off to recuperate.

The proof included the patient’s medical folder, detailing the diagnosis and treatment.

According to Mr. Tetteh Padi, the accused person reported sick to the clinic on Monday, November 8, complaining of dizziness, nausea and imbalance.

He continued that, the accused, who visited the hospital under the name Bright Allan Yeboah, was diagnosed with Vertigo and was attended to and was given two days off to rest.

The Court after listening to the medical directed the accused person to be available for hearing on the next adjourned date.

The two accused persons and eight others are in court for allegedly taking part in the activities of Take Action Ghana (TAG), a non-governmental organisation, accused by the prosecution of planning to destabilise the country and take over the government.

The rest are Corporal Seidu Abubakar, Lance Corporal Ali Solomon and Corporal Sylvester Akanpewon, who are all soldiers.