All major roads to be completed soon - Minister assures 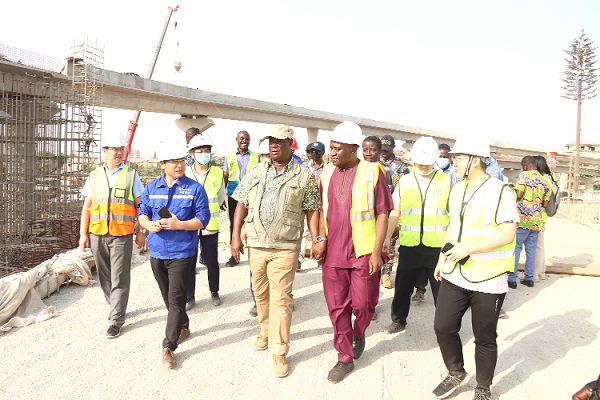 The Minister of Roads and Highways, Kwasi Amoako-Atta, has given an assurance that all major road projects under construction will be completed.

He said the government was highly committed to significantly improving the country’s road infrastructure to boost its developmental agenda.

“From this month, with the President having declared 2021 and 2022 as the years of roads, we are going to see to the completion of all the major road projects started by the government across the country since 2017,” he explained.

He gave the assurance when he visited three project sites, namely: the Ofankor-Nsawam highway rehabilitation, the La Beach Road and the construction of the flyover at Flower Pot on the Accra-Tema Motorway.

His assurance comes in the wake of government revenue shortfall that has delayed some projects to improve the transport sector.

The inspection yesterday formed part of the minister’s routine inspection of ongoing road projects in the country.

He was accompanied by some senior officials and engineers from the ministry, officials from the Ghana Highway Authority and the departments of Urban Roads and Feeder Roads and the municipal chief executives (MCEs) for the various municipalities in whose jurisdictions the projects fell.

Mr Amoako-Atta said a number of projects had been completed, adding that a few more would soon be inaugurated in the first quarter of this year.

He expressed satisfaction with the rate at which the various contractors had worked and the stages of completion they had reached and urged them not to relent on their commitment to deliver quality roads for the populace.

“The government is happy when it sees contractors putting in great efforts on projects assigned to them, despite facing some difficulties. I also want to say that the government is firmly behind all companies working to improve the road infrastructure of our country,” he said.

With regard to the Ofankor-Nsawam road rehabilitation project, the Resident Engineer, Thomas David Arthur, gave an assurance that the project was well on course, saying that it was about 80 per cent done, and that it was “far ahead of schedule”.

He, however, lamented that some aggrieved project-affected persons were stalling the progress of the rehabilitation through court injunctions

“The contractor is already working day and night to make sure the project is completed. We hope those obstructing our work will allow us to work faster and get it done,” Mr Arthur said.

On the La Beach Road project, which begins at the Independence Arch at the Black Star Square in Accra through Osu, La, Teshie to Nungua, the Resident Engineer, Bonne Acquah, said the contractor was almost done with the second tier of the three-tier interchange at the Nungua Barrier, which represented 30 per cent of the project.

He said once completed, all that would remain would be the ramps that would enable road users to access the bridges.