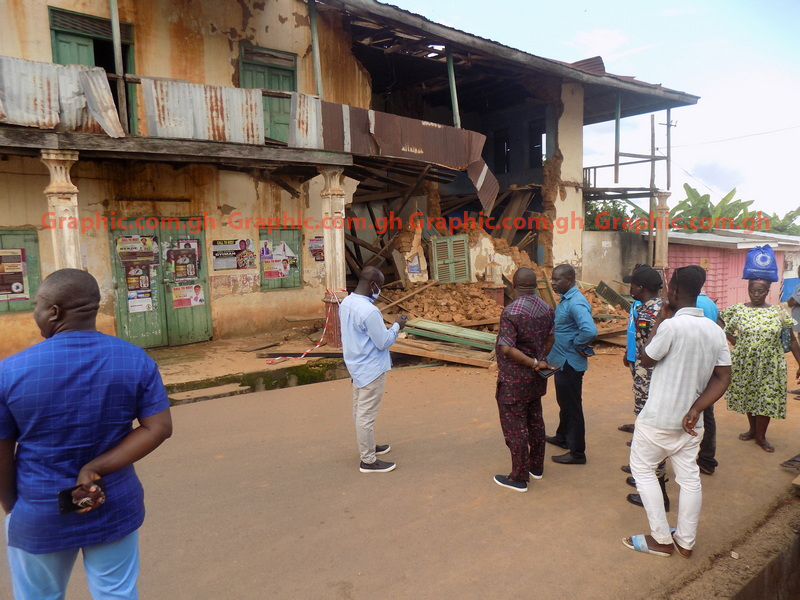 Barely four days after fire destroyed the central market at Akyem Oda in the Birim Central Municipality in the Eastern Region, another calamity has befallen the municipal capital.

On Thursday afternoon, part of the one-storey palace belonging to the Omanhene of Akyem Kotoku Traditional Area collapsed while the rest of the building has become a death trap.

The palace has been neglected for a long time as a result of 23 years of a chieftaincy dispute between the two royal Agona families of Akyem Kotoku.

After the demise of the late Omanhene, Okofobuor Agyeman Attafuah IV, the two royal families, the Attafuah and Frimpong Manso factions have disagreed about who should ascend the throne as Omanhene. 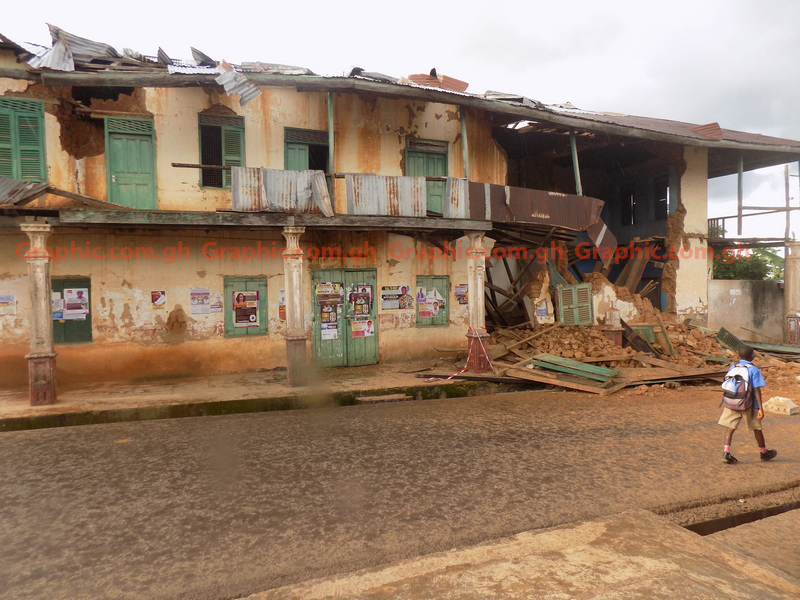 The main road behind the palace linking the Oda old and new townships has been temporarily closed to vehicular traffic to avoid preventable deaths in case of the collapse of the rest of the building, reports Samuel Kyei-Boateng.

The Member of Parliament (MP) for Oda, Mr. Alexander Akwasi Acquah, who led a delegation including the staff of the National Disaster Management Organisation (NADMO) to inspect the extent of damage to property, described the situation as unfortunate.

He attributed the disaster to lack of maintenance to the swish building as the two factions of the Agona royal family had been sitting aloof and did not know which of them was responsible for the maintenance of the palace.

“Now that it has become a public security issue and almost a death trap, I appeal to NADMO and other stakeholders to cooperate for the immediate total demolition and reconstruction of the building to prevent casualties,” Mr. Acquah emphasized.

When media practitioners contacted the Queen mother of Akyem Kotoku Traditional Area, Nana Akua Asantewaa III on the issue, she said the condition of the palace currently demanded its immediate demolition and reconstruction to save lives.

According to her, she saw the coming disaster about four years ago and called for the vacation of the occupants to pave way for reconstruction of the palace.

According to Nana Asantewaa, an emergency meeting with the MP, the Municipal assembly and the stakeholders would be held and raise funds to reconstruct it.

She, however, appealed to the government, non-governmental organisations and well-to-do Akyem Kotoku citizens to help financially to demolish the palace and replace it with a modern one befitting the palace of Akyem Kotoku paramount chief.