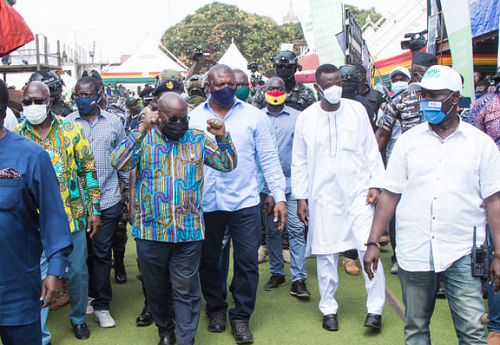 The country exported 130,000 tonnes of 19 different food items, valued at about $90 million, to its neighbouring countries in 2018, the President, Nana Addo Dankwa Akufo-Addo, has revealed.

"Reports of scores of traders from neighbouring countries in the ECOWAS region doing brisk business in the northern parts of the country are a clear indication of the new business opportunities opening up in the country for agricultural trade," he stated.

Speaking at the 36th National Farmers Day ceremony in Techiman in the Bono East Region yesterday, President Akufo-Addo attributed this development to the sound agricultural policies being implemented since his government assumed power in 2017.

The event was celebrated on the theme: "Ensuring Agribusiness Development under COVID-19 - Opportunities and Challenges".

Hundreds of people from all walks of life, including award winning farmers, ministers of state, players in the agriculture sector, businessmen and members of the diplomatic corps, filled the Techiman Methodist Park where a total of 135 farmers were rewarded at the regional and national levels.

A multi-crop farmer and livestock ranger from the Jomoro District in the Western Region, Mr Solomon Kojo Kusi, was crowned the 2020 National Best Farmer, while Nana Kofi Drobo IV, from Wenchi in the Bono Region was the First Runner-up, with Alhaji Mahamoud Awal from the Northern adjudged the Second Runner-up.

Addressing the ceremony, President Akufo-Addo observed that right from independence, agriculture had been a dominant force driving the growth of Ghana's economy notwithstanding the ups and downs encountered due to a combination of internal and external factors.

"For a greater part, the external sources have been beyond the control of governments, but the same cannot be said of factors within, since all governments have the latitude to determine their priorities in the face of limited agriculture under different administrations", he observed.

President Akufo-Addo said it was sad that Ghana had not shown consistent prioritisation of agriculture under different administrations, explaining that the situation greatly contributed to the under-performance of the sector at some periods of the country's political history.

He said Ghana's over-reliance on cocoa as the only major cash crop since Independence was a clear reflection of the failure, adding that it was regrettable because Ghana had numerous tree crops, many of which had the potential to exceed the annual earnings from cocoa, given the right support.

President Akufo-Addo explained that rolling out of the Planting for Food and Jobs (PFJ) programme in April, 2017 had provided a strategic direction which had resulted in the strides made in the country's agricultural sector.

"The target is to become self-sufficient in the production of the selected crops under the module and we are firmly on course", he stated, explaining that the current production of rice accounted for 50 per cent of home demand; an increase from 32 per cent of 2017.

Touching on the government's Planting for Export and Rural Development, the President said the programme was launched to diversify export earnings from the tree crop sector, increase farmers' income, create jobs and develop rural areas.

He said Ghana had targeted to earn a total of $14 billion from selected tree crops annually as compared to only some $2 billion from cocoa today.

President Akufo-Addo said to achieve the earnings targets set for the selected crops, the government had passed the Tree Crops Development Authority Act, 2019 (Act 1010) to regulate and develop the selected tree crops.

Addressing the occasion, the Minister of Food and Agriculture, Dr Owusu Afriyie Akoto, said the government had invested GH¢600 million annually to subsidise seeds and fertiliser over the past four years.

He stated that farmers had not disappointed the country, as the production of food was booming.

Dr Akoto indicated that to make further gains in the sector, the country was importing a $150 million and $30 million worth of agricultural machinery from India and Brazil, respectively, as part of measures to modernise the country's agricultural sector.

For her part, the Minister of Fisheries and Aquaculture Development, Mrs Elizabeth Afoley Quaye, said the fisheries sector had played a vital role in the socio-economic development of the country by contributing to job and wealth creation, eradicating poverty and providing food and nutrition security.

She said, however, that the fisheries sector in the country had been characterised over the years as small-scale due to the use of traditional fishing methods and limited modernised infrastructure facilities.

The minister said to develop agribusiness along the fisheries and aquaculture value chain, the ministry had implemented policies and programmes aimed at improving fish production, processing and marketing.

Mrs Quaye indicated that those policies were expected to yield results and help unlock the full potential of the sector.