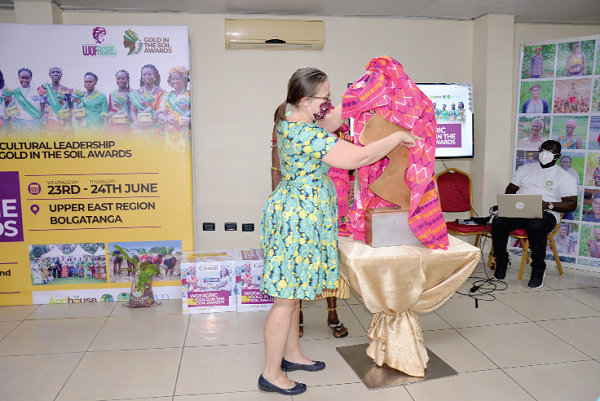 The third edition of the Women in Food and Agriculture Leadership Training Forum (WOFAGRIC) and Gold in the Soil Awards has been launched in Accra to drive the empowerment of women to thrive in the business of agriculture.

The Development Queenmother of Afigya-Kwabre in the Ashanti Region, Nana Adwoa Awindor, observed that women farmers in the country often faced a lot of challenges in the area of transportation, innovative market approaches, limited access to market, among others.

“But then again, that is why organisations such as Agrihouse Foundation have taken up the good fight, and this interventional position to ensure that these challenges that our women farmers go through in the course of contributing to our national food baskets are mitigated.

“Ghanaian smallholder farmers, the majority of whom are women, generate 80 per cent of total agricultural production in the country. Thus no support towards the resilience and sustainability of our Ghanaian agri-women is too small,” Nana Awindor said at the launch.

The WOFAGRIC and Gold in the Soil Awards is an initiative of the Agrihouse Foundation, in partnership with the Canadian High Commission, Absa Ghana and YARA.

Dubbed: “Women in Agric — Surviving, Thriving and Making Waves Beyond the Pandemic”, the two-day event is scheduled to come off between June 23 and 24, 2021, in Bolga of the Upper East Region.

The Executive Director of Agrihouse Foundation, Ms Alberta Nana Akyaa Akosa, said this year Agrihouse Foundation was focused on helping women in agribusiness to develop, improve and sustain new agricultural practices within the pandemic era and beyond.

“This year, Agrihouse is receiving nominations for the Gold in the Soil Awards from both Upper East and Upper West Region.

“This is the first time the foundation is opening up nominations in such a way — to allow more women from culturally diverse backgrounds an opportunity to participate in the awards scheme,” she said.

The Deputy Director in-charge of Development at the Canadian High Commission, Ms Stephanie Brunet, stated that Canada was glad to be part of the event, which would explore ways to enhance women’s resilience and recovery from the effects of the pandemic.

“Since 2017, Canada has been providing support to the Government of Ghana to improve its agriculture sector through an initiative called Modernising Agriculture in Ghana (MAG).

“Canada recognises that the agriculture sector continues to hold great potential for reducing poverty and inequality in Ghana.

“That is why we are providing $125 million Canadian dollars of assistance directly to the Government of Ghana to help modernise the sector. The MAG project is now in the fifth year of implementation, and I am glad to note that tremendous successes are being recorded.

“These include increases in the adoption of relevant, productivity-enhancing technologies by both female and male farmers in Ghana, the introduction of new market-oriented approaches to farm management, improvements in major crops and many more.”

The Upper East Regional Director of Agriculture, Mr Francis Ennor, in a speech read on his behalf, observed that agriculture remained the main source of livelihood for the majority of the people in the region.

“Of the total estimated farmer population of 928,090 in the region, 49 per cent are women.