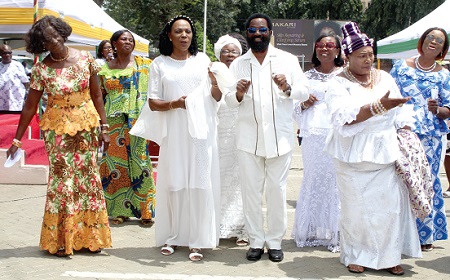 The Agbogbloshie Market has marked its 30th anniversary, with a call on traders to unite to improve on services.

The market is noted for its trade in fresh foodstuffs within the central business district of Accra for the past three decades and it celebrated the milestone, while reflecting on practical solutions to its challenges.

The anniversary was on the theme: “Providing quality and affordable foodstuffs for Ghanaians and beyond — Ensuring customer satisfaction”.

The Vice-President of the Agbogbloshie Market Traders Association, Hannah Naa Addy, in an address, expressed gratitude to the late Market Queen, Grace Adolefo Allotey, members and stakeholders of the association for the strides and the commitment to make the market a thriving business centre within Accra.


Popularly known as Mama Cash, Ms Addy explained that since its establishment 30 years ago, the market had grown to become the centre where people from various markets went to trade, with its mantra of providing quality and affordable foodstuffs for all.

“Therefore, while we are here today to mark this memorable occasion, I would like to use this opportunity to thank all the various market leaders for their contribution to the success of this market,” she said.

She advised traders to stand united and desist from insanitary practices, such as littering, to prevent the outbreak of diseases and also make progress and improve on the fortunes of the market.

Ms Addy called on the Chief Executive of the Accra Metropolitan Authority (AMA) and other authorities to ensure that the road leading to the market was rehabilitated.

She also appealed for the main market to be refurbished, as traders battled with filth while looking for good places to exhibit their wares, especially when it rained.

The Chief Executive of the AMA, Elizabeth Naa Tawiah Sackey, congratulated the traders on the years of providing and contributing to putting food on the table for the people.

She called for a unified front among the traders to build a strong force which would ensure the growth of the community in which the market was located.

While applauding them for their contributions, the AMA chief executive raised concerns about the insanitary practices of the women in the market.

She explained that as a major food distribution point for most residents in and around Accra, including restaurants, there was the need for the market women to sell foodstuffs in hygienic conditions.

Ms Sackey called on the leaders of the market to ensure that they worked under clean and safe conditions to prevent disease outbreaks in the future.

The AMA Chief Executive said the assembly was committed to ensuring the progress and growth of the market.