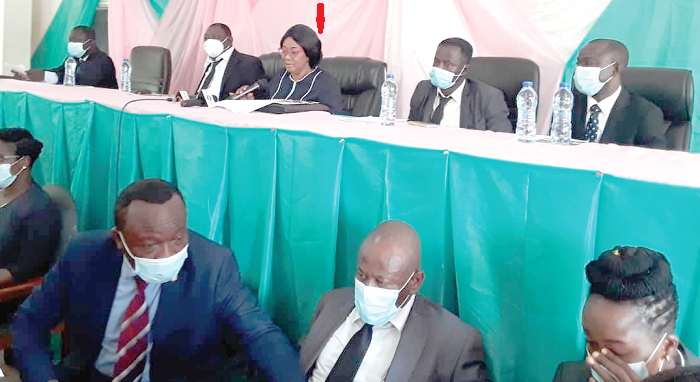 Justice Irene-Charity Larbi (arrowed), Judge-in-Charge of the Alternative Dispute Resolution, speaking at the launch of the ADR Week in Bolgatanga in the Upper East Region

A total of 5,455 cases were mediated through alternative dispute resolution in the country last year out of which 2,312, representing 42 per cent of the cases, were settled.

The ADR programme was also extended to 131 courts across the country, while 635 mediators were trained with at least five of them being assigned to each court.

Additionally, regional ADR secretariats, including coordinators and supporting staff, had been established in 10 out of the 16 regions.

The Judge-in-Charge of the ADR, Justice Irene Charity Larbi, announced this at the launch of the third quarter ADR Week celebration for the Legal Year term in Bolgatanga in the Upper East Region yesterday.

The event, which was on the theme: “Making our courts user friendly through the use of ADR," was commemorated to create more awareness of alternative dispute resolution and also sensitise other stakeholders such as judges, court officials and lawyers to the use of ADR.

Also, during the week-long celebration, mediators are assigned to courts to help parties resolve cases alternatively.

The commemoration for the first quarter was marked from April 12 to 16, this year.

According to Justice Larbi, who is also a Justice of the Court of Appeal, after nearly 16 years of the successful implementation of the court-connected ADR system, it was time for it to become the “go-to option" for people seeking justice in the country.

She said the ADR had also chalked up some “verifiable and demonstrable” successes over the years to the extent that it was “our expectation that in the years to come ADR becomes not just a complement to the justice delivery architecture” but rather an easy option for people seeking justice.

Justice Larbi also said the ADR had helped in reducing the backlog of cases in the courts substantially due to the mass mediation exercise.

“The ADR concept has served as a complement to the traditional court system in making access to justice cheaper, easier, expeditious, non-adversarial and faster for the citizenry,” she added.

Justice Larbi mentioned the advantages of the ADR to include privacy, willingness of parties to comply with agreements they make after the ADR process, promotion of healthier methods of resolving conflicts and helping to decongest the courts to enable judges to have more time for cases not amenable to the ADR.

Furthermore, she said, apart from offering financial and emotional relief to parties, the ADR also cut down cost of litigation, thereby making justice more accessible to a greater number of people.

The judge-in-charge further stressed the need to sustain the ADR mechanism since it was “critical in our goal of promoting excellence, speed and efficiency in judicial administration”.

She said the judicial service attached much importance to ADR for which reason in 2005, it created space and the necessary environment to serve the litigating public with all the benefits of ADR to ensure quality justice delivery became “real and accessible to all, especially the poor and the vulnerable".

“We can only achieve the excellence we seek if judicial outcomes are not the product of long, drawn out processes that lead to pyrrhic victories for the parties in a dispute," Justice Larbi said.