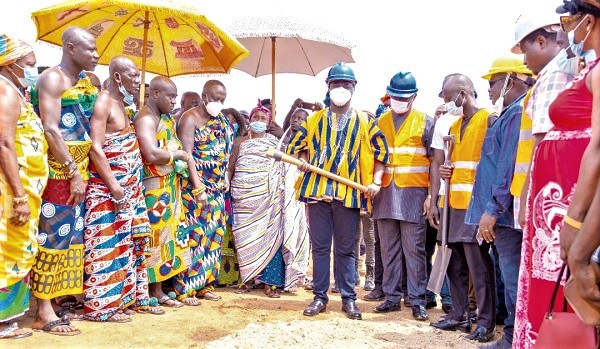 The 10 model schools, which have been awarded on contract, are expected to be completed within 10 months.

Each of the schools will have a library, information and communications technology (ICT) facilities, laboratory, a sickbay, teachers’ bungalows and other facilities to boost the teaching and learning of Science, Technology, Engineering and Mathematics (STEM).

At the sod-cutting ceremony last Friday for the construction of two of the facilities at Abenase in the Ejisu Municipality and Juaben in the Juaben Municipality, both in the Ashanti Region, Rev. Fordjour stated that the government had made adequate funding available for all ongoing educational infrastructure projects in the country, including the model schools.

He, therefore, gave the assurance that the projects would not delay for any reason.

"Funding is already available for every project that we are cutting sod for. If one is probably comparing with the narrative of times past, since this government took power in 2017, every education infrastructure only starts when there is funding for them," Rev. Fordjour said.

The deputy education minister said the Nana Addo Dankwa Akufo-Addo government prioritised education as a critical tool for the transformation of the nation, hence the huge investment being made in the sector.

Rev. Fordjour, who is also the Member of Parliament (MP) for Assin South, explained that the provision of modern educational infrastructure was part of the nation's education reforms and the 21st Century Model Junior High Schools projects were no exception.

"The time has come for us to review this. The time has come for us to improve upon this narrative. One of the surest effective strategies that we are employing to ensure that we cure the weakness at the secondary education level is to build infrastructure and equip it with all the facilities required to give true secondary school education to JHS pupils," Rev. Fordjour stated.

The MP for Ejisu and Deputy Minister of Finance, Dr John Kumah, lauded the government for the project and said when completed it would improve education as well as transform the lives of the people in the area and the rest of the country.

He also commended the traditional leaders for providing 14 acres of land for the project.

The Adontenhene of Abenase, who is also the Chief Executive Officer of the Students Loan Trust, Nana Agyei Yeboah, praised the government for placing some of the schools in the area.

He said the traditional leaders were ready and would continue to support all government initiatives so that they would turn around the fortunes of the people.

As part of efforts being made to achieve its vision of reimaging education, the Ministry of Education is currently repositioning the educational system to produce a critical mass of assertive and empowered Ghanaians, with essential skills for the socio-economic transformation of the country.

To attain the goal, the government has put in place various initiatives all geared towards equipping students with skills such as critical thinking, problem-solving, creativity, communication and collaboration so they could compete or excel globally.