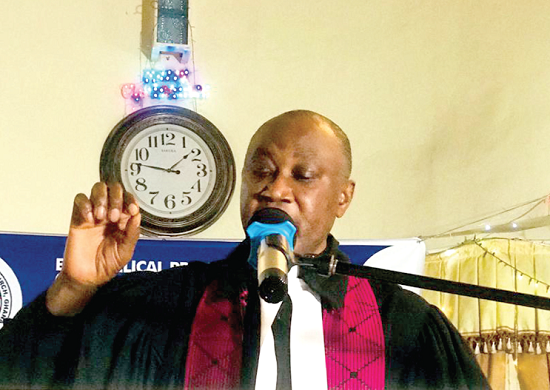 The Pastor of the Tema West District of the E.P. Church, Ghana, Rev. Emmanuel Antwi-Tumfuor, says there is the need for the country to take a critical look and provide solution to the traffic situations at the major entry and exit points to and from Accra.

That, he said, was in view of its negative impact on the health of the people and productivity in the country.

He mentioned the Dawhenya-Miotso-Central University stretch to Tema-Prampram-Kpone junctions on the Tema-Aflao Road, Ofankor Barrier to John Teye area and the Kasoa Tollbooths and Weija Junction as examples.

He, therefore, called on the government to get its engineers to do a serious re-engineering and if possible, construct interchanges at the major entry points to Accra to ease traffic.

“Example of such major entry points to Accra which must attract immediate attention for interchanges are the Dawhenya-Miotso-Central University stretch to Tema-Prampram-Kpone junctions on the Tema-Aflao Road, which for some years now has become hell for people travelling to Ada, Aflao, Agbozume, Akatsi, Sogakofe, due to  vehicular traffic congestion; Kasoa toll booths need an interchange with a suspended bridge over the Densu River to link to communities on the Eastern side of Kasoa.

“The Ofankor Barrier to John Teye area also should be considered for an interchange.  Minor interchanges along Odorkor and Weija Junctions, Kaneshie First Light, can go a long way to help manage traffic to and from the Kasoa direction. The Ghanaian Times roundabout of the Kwame Nkrumah interchange also needs serious re-engineering to allow traffic to flow along that stretch,” Rev. Antwi-Tumfuor said in a New Year’s Message delivered to the Kekeli congregation

As someone who plies most of the roads mentioned, he said, it was just unbearable when one was caught up in those snail-paced traffic situations.

Mr Antwi-Tumfuor proposed that the country adopted a private sector partnership initiative in collaboration with state agencies, where public-spirited individuals and companies could be encouraged to invest in the construction of roads within their areas and modalities made on how they could recoup their money, which could even be in the form of tolls which should be collected within an agreed period of time.

“Let me appeal to people with the resources to see it as community service by helping to construct key roads as their contributions to make movements in their communities comfortable.

While we expect good roads, there is the urgent need to work to reduce road traffic crashes which leave families devastated, especially, in cases where the victims are the breadwinners.

“The fatalities through road crashes continue to deny our country of skillful professionals who need to contribute to national progress,” he said, adding that “this calls for stringent enforcement of road safety regulations against speeding, wrong overtaking, drink driving, haphazard abandonment of faulty vehicles on the road and illegal speed ramps among others which endanger the lives of the motoring public. Our prayer in 2021 is to see drastic reduction in accidents on our roads”.

Mr Antwi-Tumfuor, who is also the immediate-past National Director of Evangelism of the E.P Church, Ghana, expressed concern about the recent fire outbreaks in parts of the country.

He advised traders not to lose their guard on adopting safety measures in their own small ways to reduce or prevent future fire outbreaks.