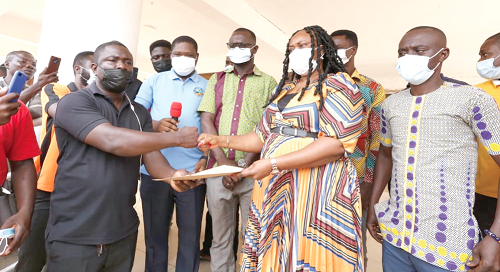 A member of the leadership of the Ada Youth Forum for Development presenting the petition to Ms Sarah Dugbakie Pobee, the District Chief Executive of Ada East Follow @Graphicgh

Hundreds of youth of Ada have held a demonstration to declare their unflinching support for the Ada Traditional Council (ATC) in the affairs of the Songor Salt enclave.

Spearheaded by the Ada Youth Forum for Development (AYFFD), the demonstration was also against persons said to be working against the interest of the youth in relation to the salt project.

In a petition submitted to the chief executives of the Ada East and West district assemblies, and the Ada Traditional Council, the convenor of the forum, Mr Ernest Kuhlenu, accused the Third World Network (TWN), a non-governmental organisation with interest in mining, of working to draw back the successes achieved by the ATC and Electrochem Ghana Limited in bringing the Songor Lagoon back to life.

He said Dr Yao Graham of the TWN, along with some individuals and groups, had opposed an agreement that awarded the Songor Lagoon to Electrochem Ghana Limited to mine salt for a period of 15 years.

He said prior to the award of the Songor Lagoon enclave to Electrochem, only a few individuals and groups benefited from the deplorable state of the lagoon at the expense of the Ada state as a whole.

With an accompanying brass band, the youth held placards with inscriptions such as “Ada Must Grow”, “Dr Graham Back Off Ada Affairs”, “Anti Ada Developers Must Back Off”, “McDan Is God Sent”, “Songor Is Alive”, among others.

The AYFFD’s petition appealed to the government to help Electrochem succeed in order for the youth and all the people of Ada to enjoy the full benefits of the Songor Lagoon.

It said the people of Ada had seen a good change after the acquisition of the lagoon by Electrochem, hence the need to promote unity among the people.

They also called on the President through the Inspector-General of Police and the military high command to deploy military and police personnel to the area to contain a supposed indiscipline said to have arisen in the area since Electrochem took over the Songor Lagoon to maintain law and order in the area.

Receiving the petition on behalf of the President, the Chief Executive of the Ada West District Assembly, Mr Adzoteye Lawer Akrofi, indicated that the area lacked development and assured the forum that he would support the project to succeed since it would also boost their revenue mobilisation and job creation efforts.

He called on all to promote peace and gave the assurance that he would work to resolve issues of concern to the people.

His counterpart at the Ada East District Assembly, Ms Sarah Dugbakie Pobee, assured the AYFFD that the petition would reach the appropriate quarters for their demands to be looked at.