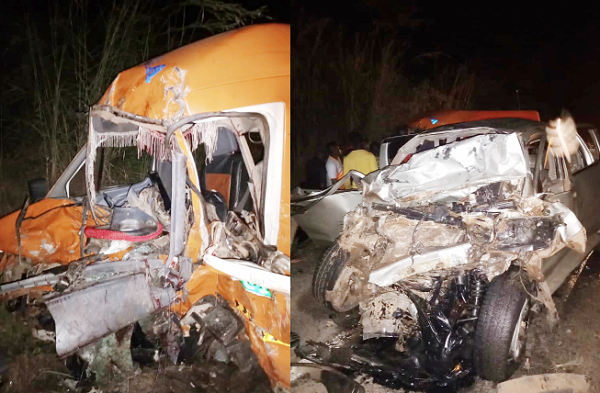 The pick-up (right) and the Sprinter bus involved in the accident
30.5k Shares

Five persons, including the driver of a Toyota Hilux pickup truck, lost their lives last Saturday evening in a head on collision at Adinkra on the Obuasi-Dunkwa-On-Offin road.

Seventeen other passengers, who sustained various degrees of injury, were rushed to hospitals in Obuasi.

The driver of the pickup, who has been identified as Alhaji Mustapha Iddrissu, 50, died on the spot together with three other passengers on board the bus.

A fifth person later died at the hospital bringing the total number of casualties to five.

The Ashanti Regional Police Commander of the Motor Traffic and Transportation Directorate (MTTD) Superintendent of Police, Mr Emmanuel Adu Boahen, who confirmed this to the Daily Graphic, said those who sustained injuries were responding to treatment.

He said the pickup was also carrying three other passengers in addition to the driver.

The mangled vehicles have since been cleared from the road and deposited at the Obuasi District MTTD office to pave way for free flow of traffic.