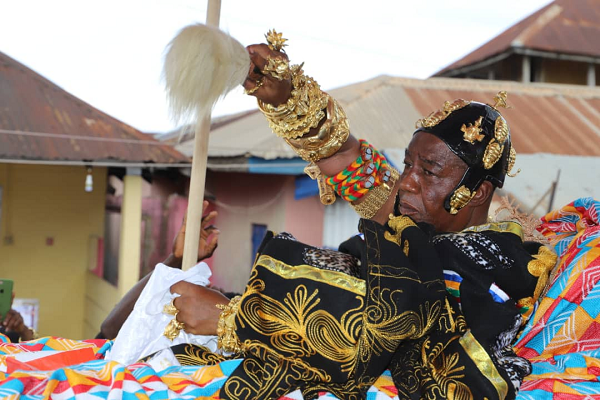 The Chief of Abetifi, Achemfuor Asiedu Agyeman III, has proposed for the construction of an airport in the Kwahu area to boost tourism, particularly during the Easter celebrations.

Such an airport, he said, could be funded by the indigenes most of whom are successful businessmen and traders.

Achemfuor Asiedu Agyeman, who is also the Adontenhene of Kwahu made the suggestion in an address at his Abetifi Palace on Sunday, April 17, 2022 to climax his 30th anniversary celebration of his enstoolment.

The occasion also coincided with the Easter celebrations of Kwahus.

According to Achemfuor Agyeman, the construction of the airport would make it possible for foreigners to fly from their destinations across the world direct to Kwahu during the Easter festivities.

The airport when constructed, he said, would be a great legacy that could not be erased from the minds of the people of Abetifi and Kwahu as a whole

He said apart from foreign tourists coming to the area by air, Ghanaians in other parts of the country where there are airports such as Accra, Kumasi, Tamale, Wa and Takoradi could also come by air to avoid vehicular traffic and vehicular accidents mostly associated with the Easter celebrations.

Achemfuor Agyeman also elaborated on the economic benefits such as the boosting of commercial activities to enable not only indigenous Kwahus to generate income but other Ghanaians and foreigners to make money.

He therefore appealed to the Kwahu community, particularly the business tycoons to buy into the suggestion and make money available for the airport project.

The government, the Abetifi Chief also indicated, could support the project technically and financially since it would not only be beneficial to Kwahuman alone but the country as a whole.

Achemfuor Agyeman further stressed that since such a big project could not be accomplished by few businessmen, there was the need for Kwahus to be united to finance it, adding that "unity is strength".