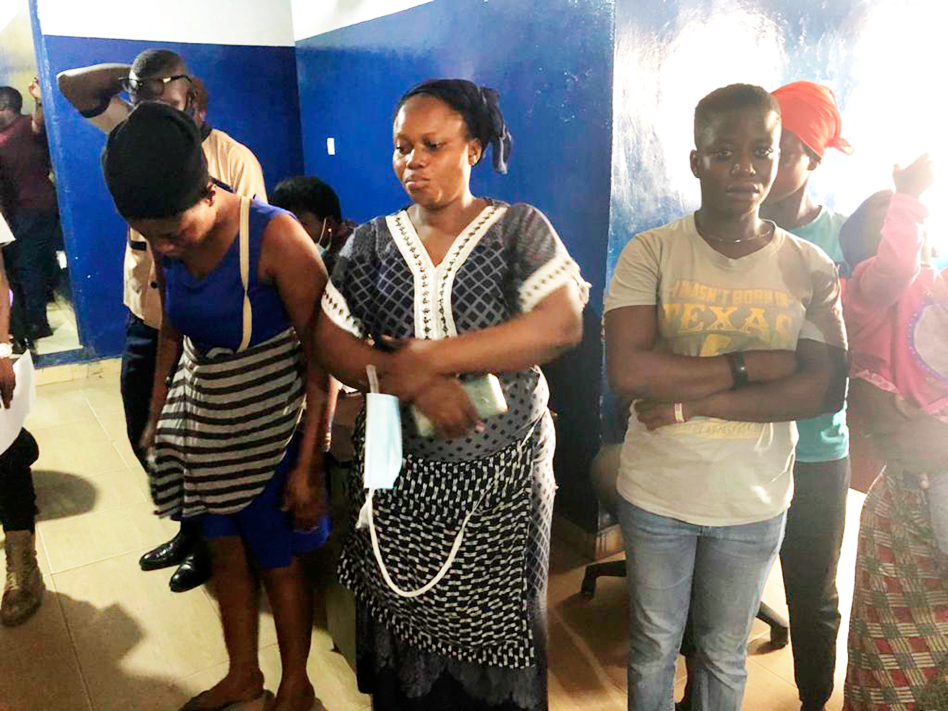 Some of the suspects arrested for not putting on face masks
30.5k Shares

The Accra Regional Police Command on Tuesday, January 19, arrested 97 people for alleged non-compliance with the mandatory wearing of face masks.

The arrested people comprised 60 males and 37 females whom the police said had failed to wear face masks while going about their businesses in public places in Accra’s central business district.

The Public Relations Officer (PRO) of the Accra Regional Police Command, Deputy Superintendent of Police (DSP) Mrs Effia Tenge, who briefed the Daily Graphic, said the suspects were apprehended in a special operation aimed at enforcing the wearing of face masks, as directed by President Nana Addo Dankwa Akufo-Addo.

She said the operation, which lasted four hours and was dubbed: ‘Operation wear your mask’, was carried out in the Tudu, CMB, Farisco and Railways areas and their environs.

She said those arrested would be processed for court.

The wearing of face masks is a mandatory safety protocol aimed at preventing the spread of the coronavirus disease (COVID-19).

Addressing Ghanaians in the wake of a sharp rise in the number of COVID-19 cases in the country, President Akufo-Addo made the wearing of face masks mandatory.

In his 22nd broadcast to the nation on Ghana’s Enhanced Response to the COVID-19 pandemic last Sunday, President Akufo-Addo said: “I have instructed the Inspector General of Police to direct officers, men and women of the service to ensure the rigorous enforcement of the law on mask wearing at all public places and in public transport.

“They are also to ensure the closure of all night clubs, pubs, cinemas and beaches that may be operating in defiance of the law. They will be assisted by the other security agencies, if need be”.

He warned that anyone found disregarding the directive and arrested by the police would be dealt with strictly and in accordance with the law.