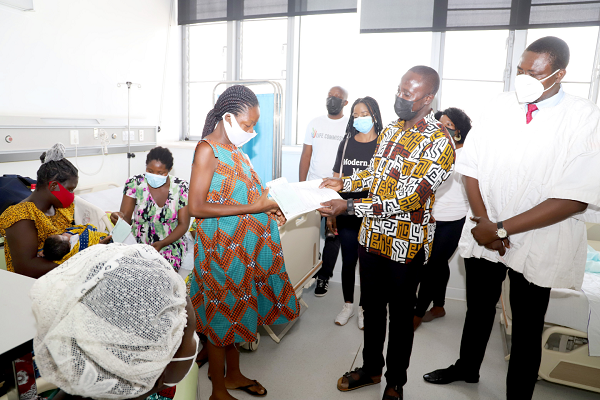 Mr Simon Awogbedek (2nd right), the Administrator of the Greater Accra Regional Hospital, presenting the cheques to Ms Doris Vondee (left), a beneficiary, who received them on behalf of the mothers at the maternity ward. Those with them include Dr Emmanuel Addipa-Adapoe (right), a Medical Officer at the Greater Accra Regional Hospital. Picture: GABRIEL AHIABOR
30.5k Shares

Two organisations last Monday paid the medical bills of eight mothers who have been freshly delivered of their babies to release them from virtual detention at the Greater Accra Regional Hospital (Ridge Hospital).

Sincerely Vee Foundation and Life Commission jointly paid GH¢13,000 to the hospital for the release of the mothers, who had been on forced admissions for days and weeks because of their inability to pay for services rendered to them by the hospital.

The two organisations were supported in their gesture by a USA-based body, Girl Trek.

According to the Founder of Life Commission, Nii Ayitey Tetteh, the charity was focused on child health and education of the underprivileged in the society.

During occasions such as Easter and Christmas, he said, the commission supported existing foundations, orphanages and child development organisations to reach out to the underprivileged.

Sometimes, Mr Tetteh stressed, the commission undertook direct projects by offering support to needy children and detained mothers who could not pay their bills.

The Founder of Sincerely Vee Foundation, Ms Vanessa Gyan, said the non-governmental organisation’s major interest was in maternal health awareness, and that it had been doing that for the past four years through visits to various hospitals.

Twice a year, she said, the organisation held seminars on prenatal and postnatal care.

The Administrator of the hospital, Mr Simon Awogbadek, expressed the gratitude of management to the two organisations for the support, adding that although the National Health Insurance Scheme (NHIS) covered pregnant women, some advanced services did not fall under that and sometimes resulted in some of them not being able to pay even after delivery.

He, therefore, urged other organisations to take inspiration from the benevolent gesture of the two bodies in order to impact other lives.

A Medical Officer at the hospital, Dr Emmanuel Adippa-Adapoe, charged the new mothers to adhere to their medical routines even after being discharged.

He encouraged them to ensure six months exclusive breastfeeding, and to report to the hospital anytime they saw yellowish signs in the eyes of their babies in order to check jaundice.