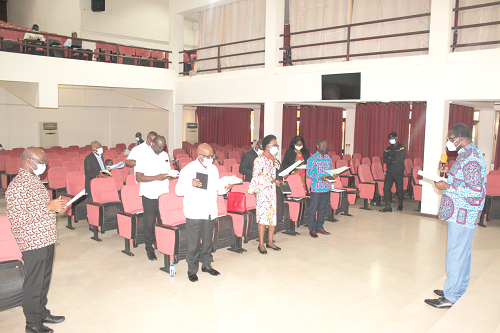 The governing councils of seven public universities in the country have been inaugurated, with a charge on the members to operate within their core mandates.

The Minister of Education, Dr Yaw Osei Adutwum, who gave the charge, said that was to ensure that the universities realise the objectives for which they had been set up.

The members of the governing councils took the oaths of office and secrecy.

Speaking at the ceremony, Dr Adutwum charged the institutions to mount courses that would be of benefit to the students.

He reminded the council members that the institutions should be able to mould and produce graduates who would be able to make value-adding contributions to the socio-economic development of the country.

He urged the members to also be interested in the curricula of the institutions, in addition to financial and governance issues.

Dr Adutwum said the institutions must be able to get students to innovate, since that was key in the current scheme of things across the world.

He called on the institutions to position themselves globally to remain relevant and not phase out as a result of competition from well-established universities.

The Minister of Education encouraged the council members pay unannounced visits to the institutions in order to have a feel of what was going on in the lecture halls.

He thanked the members for accepting the task given them, adding that President Nana Ado Dankwa Akufo-Addo had confidence in them, the reason they were chosen to bring their expertise to bear on the various institutions.

“We have confidence in your leadership roles and expertise and we have no doubt in our minds that you are going to do a fantastic job,” he said.

Earlier, in a welcome address, the Chief Director of the Ministry of Education, Mr C.K. Gyasi, had called on the council members to ensure that there was peace and unity between the authorities and the students to ensure a conducive environment for academic work.

He said it was a great opportunity for them to serve the nation by using their expertise for the betterment and development of its human resource.

He said they should also work towards academic excellence.

Taking their turns after their swearing in, the chairmen of the seven councils thanked the President for having confidence in them and gave an assurance that they would deliver to his expectation.