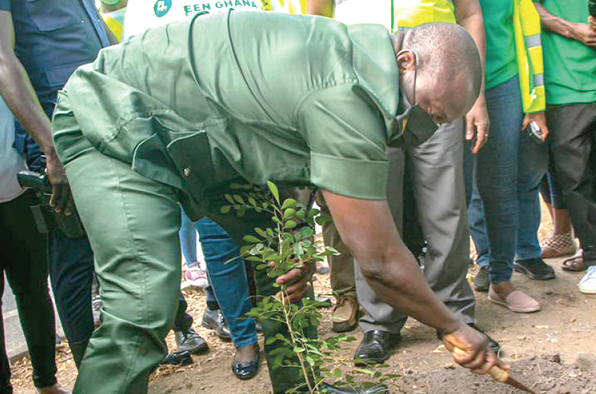 The Minister of Lands and Natural Resources, Mr Samuel Abu Jinapor, said this in Parliament yesterday.

“Even though planting figures are still being collated across the 16 regions, provisional figures from the FC clearly show that we exceeded the five million target.  This is remarkable and historic,” he added.

Over subscription of trees

Presenting a statement on post-Green Ghana Day on the floor of Parliament, Mr Jinapor said the demand for seedlings had been overly subscribed, as the event had generated a lot of enthusiasm in individuals and corporate institutions to plant trees.

“This has awakened a new national consciousness on the need to plant trees.  As I speak now, Mr Speaker, more requests are still trickling in for additional seedlings and this is a significant step to preserve our environment and ecosystem as our modest contribution to the ongoing global fight against climate change,” he said.

Many people, as well as schools and corporate organisations, joined President Nana Addo Dankwa Akufo-Addo to plant trees during the exercise.

“I wish to express my profound gratitude to the multitude of people who participated in this national and Godly exercise,” the minister said, while expressing appreciation to the President for his foresight and support throughout the exercise.

He also thanked the entire leadership and Members of Parliament for suspending the business of the House on the event day.

“That, indeed, was a non-partisan national exercise and we need to applaud ourselves for the teamwork and oneness of purpose,” the minister added.

Mr Jinapor, who is also the New Patriotic Party MP for Damongo, further expressed appreciation to the Chief Justice, former President John Agyekum Kufour, the Chairman and members of the Council of State, the Chief of Staff, the Asantehene, the Overlord of Dagbon, the Okyenhene and the National Chief Imam.

“I wish to encourage everyone who planted a seedling to nurture it to maturity,” he further appealed.

The Minority Leader, Mr Haruna Iddrisu, called for a system to be put in place to sustain the growth of the trees.

He stressed the need for the planting of more economic trees for the nation to benefit from the exportation of such trees and lauded the President and Mr Jinapor for the initiative.

For his part, the Majority Leader, Mr Osei Kyei-Mensah-Bonsu, expressed delight at the initiative and said it would help replenish Ghana’s vegetation cover.

According to him, the country's 8.5 million hectares of vegetation had reduced to 500,000 hectares, a situation which he said must be reversed.