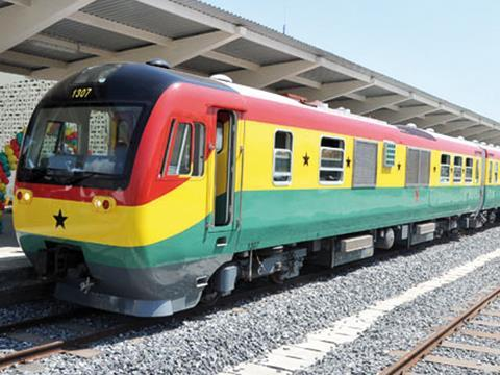 Parliament has approved a €523-million credit facility agreement between the government and the German Development Bank, Deutsche Bank, to finance the construction of sections of the western railway line from Takoradi Port to Huni Valley in the Western Region.

The House also granted waiver of import duties, import value added tax (VAT), levies and domestic levies amounting to €72.29 million on project materials and equipment to be imported for the execution of the standard gauge railway line.

The project will be executed by Amandi Investment Limited and will be completed within 42 months from the date of commencement.
The agreements and request were presented to the House on August 3, this year, by the Minister of Parliamentary Affairs, Mr Osei Kyei-Mensah-Bonsu, on behalf of the Minister of Finance.

The request and agreements were referred to the Committee on Finance for consideration and report.

Presenting the report, the Chairman of the committee, Dr Mark Assibey-Yeboah, said the scope of work comprised the construction of approximately eight kilometres of standard gauge railway tracks connecting the existing convertible narrow gauge tracks from Takoradi to the Takoradi Port for easy and efficient access for cargo handling.

The chairman said it would include the construction of a by-pass section along the Kojokrom to the Manso section of the western railway line at Eshiem to enhance the speed of the final infrastructure.

Besides, Dr Assibey-Yeboah indicated that there would be construction of a new standard gauge railway line from Manso to Huni Valley of approximately 70km of single track lines, including 10km of loop lines and double lines to the stations to improve availability of the lines for express trains and also give priority to passengers over cargo.

“Additionally, there will be construction of eight stations from Amantin to Huni Valley, including all construction works, station buildings, access roads, close circuit television (CCTV) and access control, back-up generator and water tanks.”

“Temporary works will be undertaken where and when needed to reduce the amount of stoppage to the currently running cargo operations. Such works will include temporary rail lines, temporary paths and any other diversion or by-pass of traffic or activity that prevents the works from progressing,” Dr Assibey-Yeboah said.

The chairman of the committee added that the project would witness the construction of approximately 4,000 cubic metres workshop facility for standard gauge rolling stock including fit-out machinery and equipment as well as the supply of standard gauge maintenance equipment, among others.

A major objective of government’s poverty reduction and growth agenda was the construction of a railway infrastructure to support the development of the country.

The western railway line, which is from Takoradi to Kumasi, with a 340-km branch line from Dunkwa to Awaso, was a major route for the transportation of minerals and other bulk commodities such as manganese, bauxite, cocoa, timber, cement and petroleum products, all of which have been transported on the western railway line.

In times past, the committee chairman said, the very busy passenger service from Sekondi-Takoradi to Kumasi and from Dunkwa to Awaso was also operated on the western line but unfortunately, due to several decades of neglect and underfunding, most of the western rail line was in a complete state of disrepair.

“The GRCL rehabilitated the 56km section of the western line from Kojokrom to Tarkwa and this has enabled the reintroduction of passenger service from Takoradi to Tarkwa in 2020.

“Customers that previously transported goods by rail (bauxite, timber, cocoa, flour, cement, fertiliser, etc.) have been compelled to use road and only a small fraction of manganese is transported by rail. This switch of traffic from rail to road has had a significant impact on the road network, in terms of congestion and road damage. The cost of transporting goods by rail is also far lower than the cost of transporting by road,” Dr Assibey-Yeboah said.

The government in June this year signed a €500-million contract with construction company, Amandi Holdings Limited, for the construction of sections of the Western Railway Line.

The Engineering, Procurement, Construction and Financing Contract or EPC contract covers 102 kilometres of continuous single track railway line, an initial workshop facility at a location to be specified by the government, and an initial complement of rolling stock.

The government, represented by the Minister of Railways Development, Mr Joe Ghartey, signed the contract, with Amandi, represented by its Managing Director, Mr Nadav Simhoni, for the standard gauge between Takoradi Harbour and Huni Valley in the Western Region.

The Railways Development Minister said the deal was the single largest rail contract in the country’s post-independence history.

He said the project was expected to start in October this year to be completed in 42 months.

The minister said funds had been earmarked for initial costs — employer’s and engineer’s costs and supervision facilities, including acquisition of land and payment of compensations to affected people.