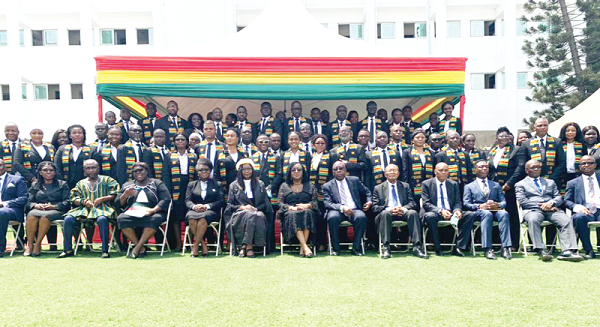 The 499 LLB students whose quest to gain admission to read the professional Law programme was met with challenges, have been inducted as students into the Ghana School of Law (GSL).

Following public outcry, criticisms and petitions, the students were later admitted after President Nana Addo Dankwa Akufo-Addo directed the Attorney-General (A-G), Mr Godfred Yeboah Dame, to take steps to have the students admitted to the GSL.

At a ceremony held last Friday at the Accra Main Campus of the GSL, the newly inducted students were led to take the induction oath by a Justice of the High Court, Justice Sheila Mintah.

They were also advised to adhere to the ethics of the legal profession as students and when they eventually became lawyers.

A private legal practitioner, Mrs Sheila Minkah-Premo, who gave the advice, said a good lawyer did not only know the law, but also worked in accordance with the ethics of the profession.

“Professional ethics are key in ensuring an independent, competent and effective legal profession,” she said.
If you do not work per the ethics, you will find yourself in trouble. The law has sanctions and you can even be disbarred, she said.

Mrs Minka-Premo said a lawyer, whether working in a law firm, a company or for the government, was a trusted advisor and representative.

In view of that, she said ethical principles such as honesty, confidentiality, integrity, fairness, avoiding conflict of interest and upholding a client’s interest should be the hallmark of a good lawyer.

Also, she said an ethical lawyer charged the right legal fees without shortchanging his or her client or using dubious means to use the client to enrich him or herself.

On the issue of confidentiality, Mrs Minka-Premo said a lawyer who failed to guard the confidential information of his client was breaching a sacred oath of the profession.

Confidentiality, she said, was not only an ethical obligation, but a contractual and a legal obligation on lawyers.

She explained that confidentiality was not also limited to lawyers but also all those working with lawyers, including clerks, interns and assistants.

“A lawyer commits misconduct if he discusses or permits to disclose without his client’s consent any confidential information to him or his firm by or on behalf of his client,” she said.

Mrs Minka -Premo said lawyers were ethically bound to protect the interest of their clients.

As part of that duty, she said lawyers must avoid any form of conflict of interest by not representing two parties in the same dispute.

Again, she said a lawyer had an obligation to inform a client if there were other alternatives in resolving a matter without necessarily resorting to litigation.

“From the knowledge of the law, a lawyer can see that a matter can easily be settled without going to court. You must let the client know. Going the litigation way which takes a lot of time and money is not always the best way for the client,” she added.

Welcoming the students, the Director of Legal Education, Mr Kwasi Prempeh-Eck, said the GSL would provide the students with a conducive environment to learn and sharpen their skills to become excellent lawyers.

He urged the students to take their studies seriously and also learn from their lecturers in order to achieve their dreams of becoming lawyers.