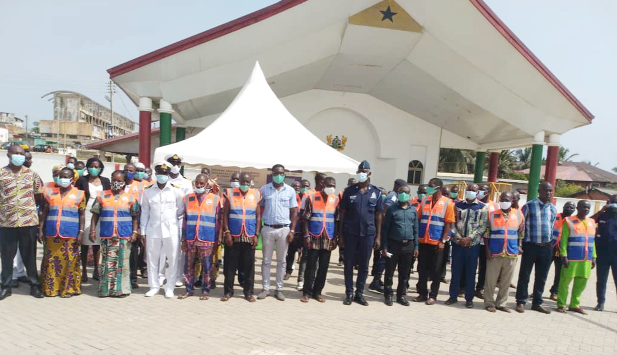 Members of the LaBECs with dignitaries at the inauguration ceremony in Cape Coast
30.5k Shares

Representatives of the 48 committees for each of the 48 landing beaches were sworn into office at a ceremony in Cape Coast before Christmas eve.

They were by that expected to begin work protecting landing beaches within mapped out fishing communities in the region.

The LaBECs comprising fisher folk from along the various coastal communities, will have the mandate of assisting in protecting landing beaches against illegal fishing activities.

The LaBEC is being undertaken under the Far Dwuma Nkodo project being implemented by the Environmental Justice Foundation (EJF) with support from the European Union (EU).

Speaking at the inaugural ceremony, a Programme Officer of the Environmental Justice Foundation (EJF), Mr Kuusaana Peter Canisius, said the essence of the committee was to complement the efforts of the Monitoring, Control and Surveillance team (MCS) that had few personnel policing all the landing beaches.

“The essence of this Landing Beach Committee is to open up our monitoring, control and surveillance to the fishers themselves.

“These committees will make it possible for canoe fishermen to also support the fisheries commission in monitoring and controlling illegal activities at the various beaches,” he explained.

The Assistant Command Operations Officer at the Western Naval Command, Lieutenant Commander Charles Darkwah, charged members of the LaBEC to ensure that their predominant mandate of monitoring and protecting the beaches was discharged, devoid of personal sentiments to avoid diversion from the committee’s initial mandate.

“Having been trained diligently, you have a charge to ensure that our landing beaches are well protected from illegal acts.

Stick to your purpose, remember the purpose of the committee will be defeated if we carry along our personal sentiments and completely disregard the purpose for which this committee was formed,” he advised.

Some members of the LaBEC who spoke to the Daily Graphic said the desire to protect the landing beaches had been a longstanding vision for them as fishers to enable them to sustain their source of income.

A fisherman from Kormantse and member of the LaBEC, Mr Kobina Mposu, said “we were voluntarily doing this and we will continue to do so diligently as we have had the encouragement and support from the Fisheries Commission.”