424 Lawyers called to the Bar 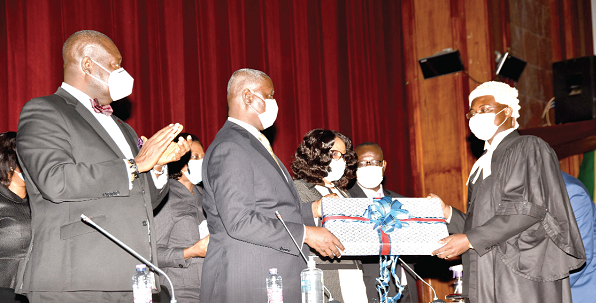 The Chief Justice, Justice Kwasi Anin Yeboah, has inducted 424 newly qualified lawyers into the legal profession, with a call on them to be decorous and measured in their language, especially in the courtroom.

He said the legal profession was a noble one which commanded lot of respect and so it was important for lawyers to mirror that in all aspects of their lives.

“The use of intemperate, offensive and abusive language in professional dealings must be fiercely resisted at all times by all lawyers, no matter the height of the temptation.

“Lawyers should refrain from the use of offensive language or behaviour before the courts,” Justice Anin Yeboah said.

This year’s induction was the 57th by the General Legal Council (GLC).

Justice Anin Yeboah led the new lawyers to take the legal profession oath and also declare an undertaking that enjoins them to practise the profession in accordance with the prescribed code of conduct and rules.

The Chief Justice, the Attorney-General and Minister of Justice, Ms Gloria Afua Akuffo; some justices of the Supreme Court and the President of the Ghana Bar Association (GBA), Mr Tony Forson, took turns to present certificates to the lawyers.

Other justices of the Supreme Court who presented the new lawyers with certificates were Justices Jones Victor Dotse, Paul Baffoe-Bonnie and Yaw Appau.

Special prizes were awarded to lawyers who excelled in the professional course at the Ghana School of Law (GSL).

Justice Anin Yeboah further cautioned the lawyers to take the ethics of the legal profession more seriously, especially at an early stage, in order not to dent their careers.

“The disciplinary Committee of the General Legal Council will continue to ensure the proper conduct of all lawyers, while ensuring that the clients of lawyers receive the required standard of work,” he added.

On improvement in legal education, the Chief Justice said the GLC had been working to ensure that the various Law faculties feeding students into the Ghana School of Law met the required standards.

The GLC, he said, was preoccupied with developing policies to enhance the capacity of the various institutions running the LL.B programme, adding that it was also restructuring the operations of the Independent Examination Committee to enable it to discharge its mandate more efficiently.

Justice Anin Yeboah further said the council would ensure the full Implementation of its legal authority to admit only students who obtained their LL.B degrees from universities approved by the council.

“The legal framework to implement this is underway and the council will ensure broader stakeholder consultations in this regard. All universities offering the LL.B programme will undergo a more rigorous screening process before approval,” he said.