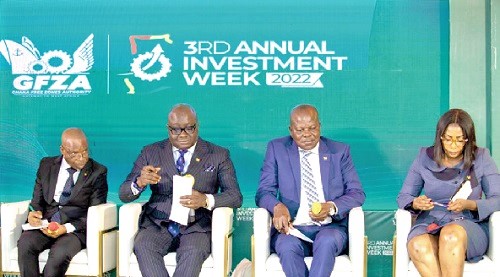 • Mike Oquaye Jnr (2nd from left), CEO of GFZA, speaking at the launch of the 3rd annual Investment Week in Accra. With him are John Abuga (left), Director of Compliance, GFZA; Nsiah Asante (3rd from left), the Director of Estate and Zones, GFZA, and Patience Acolor, Director of the Tema Administrative Office
30.5k Shares

BETWEEN August last year and the first week of this month, 39 new companies were licensed by the Ghana Free Zones Authority (GFZA) to do business in the country.

The companies, which are operating in various sectors of the economy, are expected to inject about $230m into it.

The Chief Executive Officer of the GFZA, Mike Oquaye Jnr, who announced this at the launch of the 3rd annual Investment Week in Accra, estimated that export earnings from the 39 companies would be about $529 million annually.

The export earnings were expected to be realised from an estimated production value of US$436 million, Mr Oquaye Jr said at a media briefing in Accra last Monday.

He also disclosed that as of 2020, the country had realised US$ 27 billion in investments, revenues and other benefits from the free zones enterprise programme since its introduction.

The week-long celebration which starts from December 5 to 9 will showcase the authority’s achievements and prospects for both local and foreign businesses in the country.


It is on the theme: "GFZA: Championing export-led industrial growth in the context of AfCFTA and world trade."

Among activities earmarked for the week-long celebration are engagements with the media and the business community by the GFZA, road shows, one-on-one interactions, interviews, organised enclave visits, among others.

It will be climaxed with a CEO's networking session, to be attended by senior government officials, including ministers of state, CEOs and captains of industry, who will discuss, among other issues, the pathway to supporting businesses to optimise exports within Africa and beyond.

He said the situation offered the indigenous companies the opportunity to take advantage of free zones incentives to make an impact on the international market.

“Our programmes are open to all investors, both foreign and local. Moreover, with the opportunities that AfCFTA also offers, we are encouraging Ghanaian-owned businesses to take advantage of the 1.3 billion African market to expand their activities. The impact of this on the economy cannot be overemphasised,” he added.

On the depreciation of the cedi, Mr Oquaye said the country was currently grappling with a balance of trade deficit due to the situation of the national currency.

He said it was necessary to increase exports to earn the needed foreign exchange to stabilise the cedi.

“An export-led industrial growth is one of the most appropriate strategies to achieve economic development, and this has been the mandate of the GFZA.

“The importance of the free zones programme in reversing our country’s balance of trade deficit and the depreciating cedi is vital,” he added.