3 Robbers gunned down by police 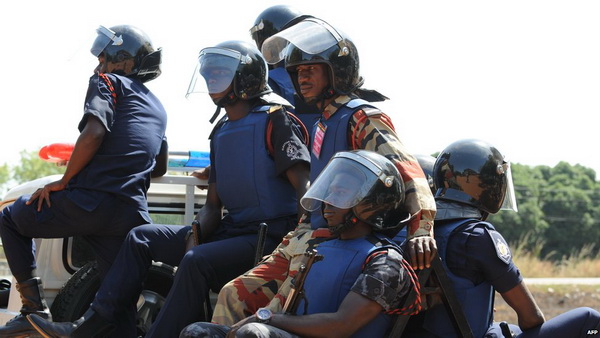 Three suspected robbers were gunned down by the police on the Spintex Road and at Agbogba, both in Accra, in separate encounters with the police.

Two of the suspected robbers were shot during the exchange of gunfire with the police who were on patrol duties at Coca-Cola Down on the Spintex Road about 12:30 a.m. on Tuesday.

The third person was shot near the Agbogba Cemetery when a police patrol team spotted him with a gun on him early last Monday. He was in the company of two others suspected to be his accomplices.

The identities of all the three are yet to be established, while the police are holding the two suspected accomplices who were arrested near the Agbogba Cemetery.

Briefing the Daily Graphic, the Public Relations Officer of the Accra Regional Police Command, Assistant Superintendent of Police Mrs Effia Tenge, said a police patrol team spotted three men on the Spintex Road and became suspicious of them when one of them was seen in a face mask.

When the police tried to stop the suspected robbers on a motorbike, they sped off and the police pursued them.

She said the men on the motorbike who were carrying bags on their backs exchanged fire with the police.

In the course of the exchanges, two of the men on the motorbike, including the one who was wearing the face mask, sustained gunshot wounds and fell off the motorbike.

The police arrested the wounded men but they died a few minutes afterwards.

Mrs Tenge said when the police searched the carrier bags on the backs of the suspected robbers, they retrieved a foreign pistol loaded with live ammunition, a locally made pistol loaded with a cartridge, two spare cartridges, a car jark, a pinch bar, a pair of scissors and a giant screw driver.

They also found a torch, two face masks and a mobile phone.

On the suspected robber who was shot dead near the Agbogba Cemetery, she said a police patrol team spotted three men smoking in front of a drinking spot in the wee hours of last Monday.

She said the police patrol team approached them and after questioning them, they decided to conduct a search on the suspects.

In the course of the search, a weapon was found concealed around the waist of one of the suspects.

At that point, the armed man kicked the policeman searching him when he realised that the firearm had been discovered and attempted to jump over a wall close to the drinking spot.

The police shot him and he fell into the compound of a house but was found dead when his body was retrieved. His two accomplices were arrested.

Mrs Tenge said the bodies of the three suspects had been deposited at the Police Hospital mortuary.