21 Charged with killing a chief of Ardeyman 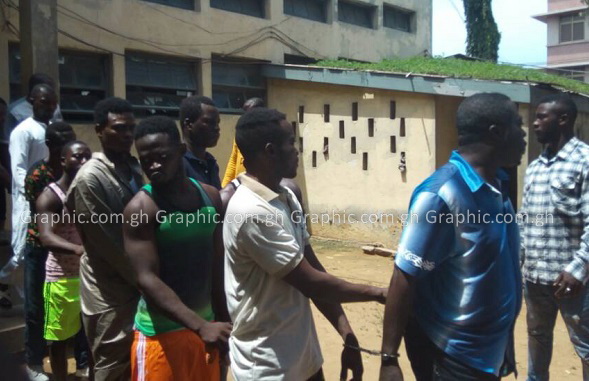 Twenty-one people alleged to be involved in the murder of the Development Chief of Ardeyman near Accra, Nii Tettey Saban, were yesterday remanded in police custody by the Adjabeng District Court.

The court, presided over by Mr Isaac Addo, remanded the accused persons for the police to conduct further investigations into the case.

All of them have been charged with conspiracy to commit murder, murder and two counts of attempted murder after they allegedly tried to kill two other persons identified as Jonathan Aryeteey and Kojo Richard.

Asafoatse Neequaye Kortey has also been charged separately for the unlawful possession of explosive, firearms and ammunition.

On June 8, 2017, Nii Saban was found dead in a room at Ardeyman, near Adjen Kotoku, with his body riddled with bullets and with machete cuts.

At the hearing yesterday, the prosecutor, Chief Inspector Gregory Yeboah, told the court that  on June 8, 2017, Nii Saban and some family members were attacked by the 21 individuals  armed with  “AK 47 rifles, pistols, cutlasses and clubs’’ during a ritual to lift the ban on drumming and noise making as part of the Homowo festival.

According to him, the attackers fired indiscriminately and as a result, Nii Saban and some of his family members fled for their lives.

“The attackers chased Nii Saban who had entered a room for safety, fired at him and also inflicted machete wounds on his whole body. They then carried and dumped him in another room and bolted,’’ he said.

Investigations, the prosecutor said, led to the arrest of Kortey, Mohammed and Yakubu at Kwabenya, near Accra on June 12, 2017, while Laryea, Akumah and Boateng were arrested on June 18, 2017.

Chief Inspector Yeboah explained that the rest of the accused persons were arrested on June 21, 2017 after some of the victims of the attack had identified them.

The facts, as presented by the prosecutor, were vehemently denied by the legal team of the accused persons, who described their arrest as victimisation.

Their lawyer, Mr Daniel Afari Yeboah, told the court that most of the accused persons were arrested because they had a land dispute with certain individuals at Ardeyman.

According to him, his clients had no connection with the alleged murder and at the time of the incident, most of them were not even in Ardeyman.

“Their arrest was not contingent upon any preliminary investigations. It is a clear case of victimisation,’’ he said.

He also argued that the facts were not specific as to what each of the accused persons did in connection with the alleged murder.

He prayed the court to prevail on the police to put their house in order and to do proper investigations into the case.

Based on the submission by the defence counsel, the court ordered the police to expedite their investigations into the case and also make copies of the charge sheets available to the lawyers of the accused persons.