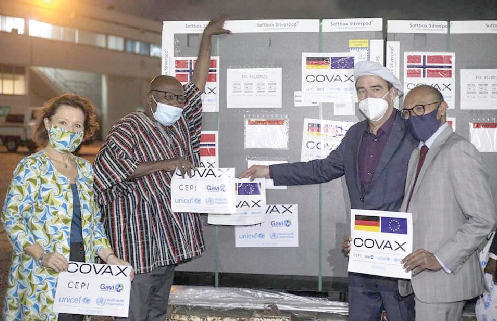 Mr Daniel Krull (2nd right) symbolically hands over the consignment of vaccines to Mr Mahama Seini (in smock) while officials of the EU look on
30.5k Shares

The first batch of the 1.5 million doses of AstraZeneca vaccines that the German government promised Ghana has arrived in the country.

Numbering 389,200 doses, the first batch varrived last Monday and was received at the Kotoka International Airport (KIA) by the German’s Ambassador to Ghana, Mr Daniel Krull, who then handed over them to the Deputy Minister of Health, Mr Mahama Asei Seini,

An additional 1.5 million doses are expected to arrive in the country to support Ghana’s effort to get over 20 million of its population vaccinated.

The arrival of the vaccines is from Germany’s national allocation via the COVAX facility.

It is in fulfilment of a bilateral discussion President Nana Addo Dankwa Akufo-Addo held with his German counterpart, Chancellor Angela Merkel, during his recent visit to Germany.

During a summit with African leaders in Berlin last month on the G20's Compact with Africa initiative, Merkel told a news conference after the summit that "Germany will make available not only 30 million doses of vaccines but it will be as much as 70 million doses."

He said since the outbreak of the COVID-19 pandemic, Germany had supported Ghana in the fight against the outbreak in the country by providing logistic support amounting to a value of more than 25 million euros.

The support included the construction of an Intensive Care Unit for a hospital in Takoradi, 45 ventilators and 5,000 pulse oximeters for several hospitals in Ghana, support for laboratories at the Kumasi Centre for Collaborative Research (KCCR) and the Noguchi Memorial Institute, personal protective equipment (PPE), including 470,000 face masks, as well as the distribution of nutritious meals for frontline healthcare workers.

The bilateral assistance to Ghana, the Ambassador explained,  complements Germany’s contribution to the ACT-A distribution platform, of which Germany is the second-largest donor, providing 2.2 billion Euros. COVAX is part of ACT-A.

An earlier statement from the Embassy explained that COVAX plans to distribute up to three billion doses by the start of 2022. This way, 30 per cent of the population in developing countries could be vaccinated.

Every fifth euro spent on these vaccines is provided by Germany and more than every third by the EU. Germany’s contribution is enough to enable COVAX to buy 320 million doses of vaccines.

In addition to its financial contribution to COVAX, Germany will pass on 100 million doses primarily to countries in transition and developing countries, 90 per cent of which will be distributed through the COVAX vaccine platform, like the ones arriving today.

Mr Seini, on behalf of the Ministry and Government of Ghana, expressed appreciation to Germany for the support which would further boost Ghana’s efforts to vaccinate 20 million people by the end of this year.

He said it was important that countries helped one another to ensure that the whole world was vaccinated as that was the surest way of winning the fight against the pandemic.

A few weeks ago, Ghana took delivery of some 249,000 doses of Astrazeneca vaccines from the United Kingdom (UK) government to support its vaccination drive.

The latest donation from Germany brings to 3,589,200 the doses of vaccines Ghana has so far secured.

Meanwhile, the Ghana Health Service (GHS) has indicated that it will from next week start administering the 1.2 million Moderna COVID-19 vaccines it received from the United States (US) government.

According to the GHS, the training of its personnel on the use of the vaccine is expected to be completed this week across all 16 regions of the country.

The next phase of the vaccination will cover all persons 18 years and above.