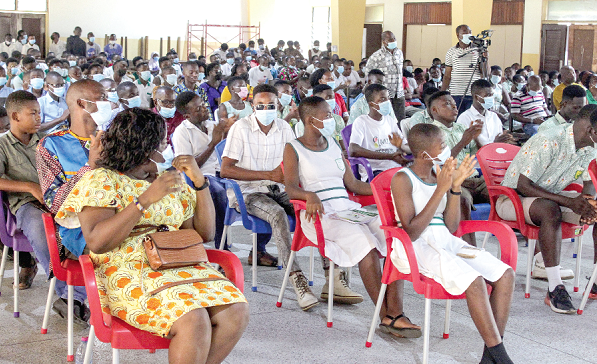 Eighteen junior high schools are set to battle it out for the ultimate trophy of the second edition of the Brain Battle Quiz National Science and Technology Engineering and Mathematics (STEM) championship.

The competition, which is set for all Catholic basic schools in the country, has been grouped into the quiz and science project categories.

Winners of the quiz category in this year's edition will take home the ultimate trophy, a post-secondary scholarship to study an undergraduate programme in Canada and a GH¢15,000 worth of computer laboratory set.

Those in the science project category will also take home a post-secondary scholarship to study an undergraduate programme in Canada and a GH¢10,000 worth of HADSBAK furniture set and a trophy.

The Chief Executive Officer (CEO) for Cocktail Media, Mr Samuel Boateng, in an address at the opening ceremony for the climax of the competition, noted that there was a need for the society to train children in the science field from the beginning in order to nurture their love for the subject.

He revealed that this year’s competition was going to be more practical and “applicable to our everyday live with a three-round session focusing on laboratory practical, how mathematics is applied in our everyday life and lastly a round on black scientists where students will be quizzed on African scientists who have made an impact from around the world”.

In a speech read on behalf of the General Manager of Catholic Schools, Ms Araba Bentum, the Manager of the Catholic Schools in the Savannah Region, Mr Rafael Lieber, stated that the current globalised world needed scientific innovation which influenced economic competitiveness, quality of life and national security.

He further mentioned that much of the future jobs would be STEM based and there was, therefore, the need for the country to be prepared in that vein.

He urged the competing schools and students to have confidence in themselves and in what they were doing in order to bring glory to their schools and regions.

“Have confidence in yourselves and dispel all fears so that you may bring honour and glory to your schools and to yourselves as well,” he said.