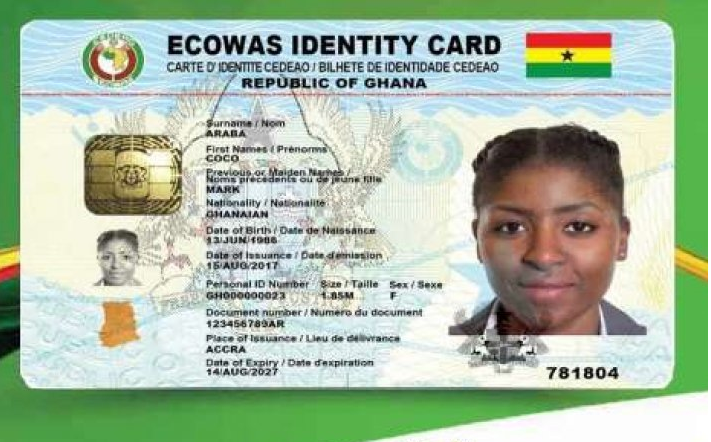 More than 16 million Ghanaians have so far registered for Ghana’s national identity card, the Ghana Card, the Head of Corporate Affairs at the National Identification Authority (NIA), Mr Abdul-Ganiyu, has said.

The figure represents 85 per cent of Ghana’s adult population.

Although foreign residents have also been registered and issued with their Ghana Cards, the NIA is yet to confirm the details of their statistics.

Mr Abdul-Ganiyu, who disclosed this in an interview with the Daily Graphic last Monday, also revealed that so far the NIA had issued cards to all the people who had been registered, but about two million of the cards were yet to be collected.

The main reason for that situation was primarily the change of collection points, particularly for those who were registered during the mass registration exercise, he said.

“Initially, the challenge with the collection was the backlog from the mass registration exercise and the technical challenges that made it impossible for the cards to be given out promptly.

“However, that has been resolved, but some people still failed to report at the collection points on scheduled times when they were asked to,” he explained.

Mr Ganiyu indicated that those cards yet to be collected had been lodged with the newly set up district offices of the NIA, which had augmented the operational areas of the authority.

“The NIA’s 275 district offices are now operational, in addition to an office each in the 16 regions of the country, to facilitate that. So we have 291 offices across the country and the cards are lodged there for collection. We hope that those who have registered but are yet to receive their cards will visit their various district offices to collect them.

“That service is in addition to the ongoing registration being undertaken by our offices,” he explained.

Despite the opening of district offices to make it easier for the collection of already issued cards or go through  the process for a new one,  many people  continue to show up at the various registration centres, desperate to get their Ghana Cards, now a mandatory ID for the SIM Card re-registration, social security and most bank transactions.

A visit to some district offices and even the head office of the NIA showed that the crowds had not gone down, with some of the people reporting as early as 5 a.m. in their bid to get their Ghana Cards.

Some of the district offices visited in the Greater Accra Region were Ablekuma, Klottey Korle at the Registrar-General’s Department, La Nkwantanang, Adentan  and Ashaiman.

Almost all the offices visited had adopted the booking system, where people were booked and scheduled for appointments on the same day or later days.

At the Ashaiman District Office, the crowd was as thick as it had been since December 2021.

The office was the only one serving the whole of the district, with the nearest office being at Kpone, which is catering for the Kpone Katamanso District.

That situation had created a tough scenario for the registration officers at Ashaiman.

To help bring the situation under control, the offices had come up with service plans to make their job efficient, as well as serve the customers effectively.

Many people, however, were not complying, and even after receiving their numbers, they decided to stay around until it is their turn.

A similar situation was observed at the La Nkwantanang and the Adentan districts.

Almost all the district and regional offices of the NIA in the Ashanti Region are, on a daily basis, filled with people trying to acquire what will soon become the only national ID for the transaction of all businesses.

Already, the Bank of Ghana has given indication that only the Ghana Card will be the required ID for all financial transactions in the country.

Staff of the NIA are those feeling the brunt of the pressure, as more people troop in on a daily basis, giving the staff no breathing space.

On a visit to the Ashanti Regional Office of the NIA last Thursday afternoon, the Daily Graphic saw a large crowd of people trying to have their Ghana Cards replaced.

While the district offices were mainly attending to first-time registrants, the regional office was attending to both first timers and those who had misplaced their cards and were looking for replacements and those making corrections on their cards.

At the Kumasi Metro office, however, the queue was not as long as that of the regional office.

Aside from registering new people, the office was also distributing cards to those who had registered during the mass registration exercise.

At the NIA Head Office, there was a long queue that came all the way to the pavements of the adjourning offices.

The Daily Graphic observed that the slow service had caused some agitation among the people, some of whom were unhappy that they had spent hours to be served, even for the premium service.

Most of the district officers with whom the Daily Graphic spoke said the services were smooth, despite the high demand for them.

They said the agitation by some people was as a result of the lack of understanding of the process they had put in place.

That, he explained, had caused some of them to doubt the smooth running of the process.

“Someone came all the way from Prampram to Ablekuma, thinking that he could get his card done here because the crowd at Prampram was apparently too thick. Unfortunately for him, it was the same booking process that we are doing here in Ablekuma, so he left in frustration,” he said.

Mr Ganiyu explained that the huge crowd at the head office was due to the service the NIA was rendering at the headquarters, which was premium.

The premium service included  the registration of new applicants, replacement of lost cards, update of records on old cards and registration of foreigners who were legal residents in the country, he said.

One of the challenges was the impatience on the side of applicants, he noted, saying the situation had arisen because the head office was the only place offering the services listed under the premium service.

He indicated that the crowd situation was as a result of the Ghana Card  being required for the data harmonisation and synchronisation with SSNIT and NHIS numbers and the re-registration of the SIM cards.

To help curb the long queues, Mr Ganiyu explained that apart from appointment pre-bookings, the staff strength had also been augmented from four permanent staff to eight, with four people engaged on contract  basis in each district office.

“All these are intended to make the service more efficient,” he emphasised.

He urged the public to be patient and do well to follow the procedures, which would help them get the registration and other services done.

He also mentioned that double registration by some applicants and the provision of wrong details by applicants were some challenges that caused the delay in issuing the cards.