108 Ghanaians, Liberians deported from US 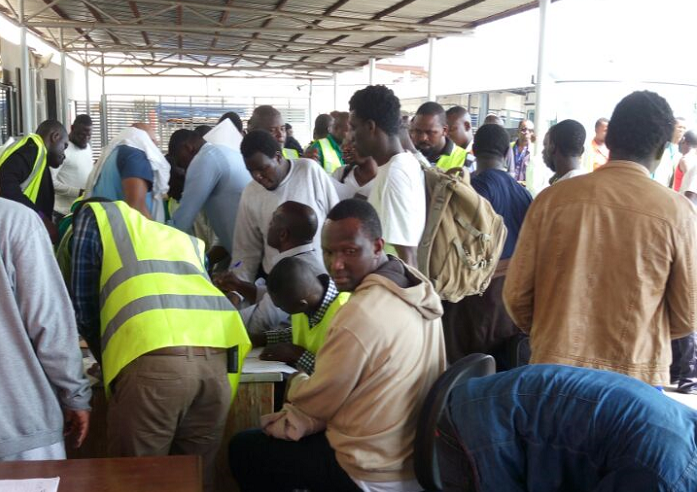 Some of the deportees at the Kotoka International Airport in Accra
30.5k Shares

There was a standoff between 108 Ghanaians, Liberians and officials of the United States of America (USA) at the Kotoka International Airport  (KIA) after the Ghanaians and the Liberians had been deported from the US to Ghana yesterday.

After the deportees had arrived at the KIA at 10 a.m. on a chartered flight, they refused to disembark and accused the US officials of manhandling them.

The deportees, some of whom were said to have served various jail terms for drug-related offences, demanded that they  be sent back to the US.

Others were deported for staying illegally, over staying their permits and other crimes.

Personnel of the Ghana Police Service, the Ghana Immigration Service (GIS), the National Disaster Management Organisation (NADMO) and some officials of the Ghana Airport Company had a tough time before getting the deportees to disembark,

Some of the deportees engaged in exchange of words with the officials who had come to welcome them, while others verbally abused the officials and called them names.

When they finally stepped out of the plane, some of them, suspected to be hardened criminals, were seen in handcuffs, while others carried their heavy jackets.

Later, all the deportees were assembled at the arrival terminal where officials of NADMO and the GIS were seen busily taking down their details.

When they were freed, some of them demanded money from the officials present to enable them to pay for their transportation back home.

Some of the deportees who spoke with the Daily Graphic claimed they had been maltreated by the US officials.

One of them said: “ We were handcuffed by the US authorities before we boarded the plane and even though we pleaded with them to remove the restraining devices while we were on board, they refused. Strangely, when the plane landed, they freed our hands and legs and asked us to disembark. That is why we said we would not get down unless they allowed us to get down with the handcuffs for everybody to see how they had treated us.” 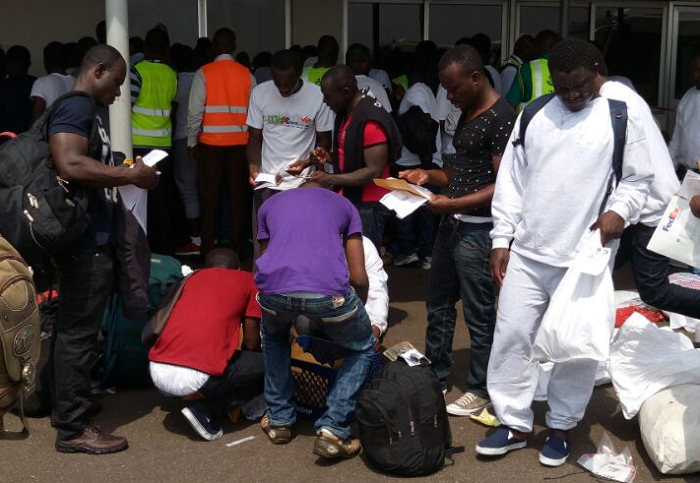 Some of the deportees who claimed they had been picked up in their homes during a raid on illegal immigrants in their states, explained that they were not criminals.

They said they were only fed with bread and water and had their movement restricted while on board the plane, since they had put restraining devices on their hands and legs.

Speaking on condition of anonymity, one of the deportees, who claimed he had been handcuffed since last Monday when he was arrested in Louisiana, USA, said: “I could not urinate, sleep or eat. We were handled like animals.”

They later demanded transportation fares from the Ghanaian officials present at the airport, as some claimed they had to return to their families in Kumasi in the Ashanti Region, Sunyani in the Brong Ahafo Region, Tarkwa in the Western Region, Tamale in the Northern Region and Kasoa in the Central Region.

They were disappointed when they found out there was no such provision, a situation which resulted in heated argument between the deportees and the NADMO and Immigration officials who had taken their details.

They said as deportees, they were supposed to have been provided with allowance for some days, but nothing was given to them and since they didn’t have family members in Accra, they didn’t know how they were going to travel to their final destinations.

The Airport Divisional Police Commander, Chief Superintendent of Police Mr Yao Tettegah, who led a team of policemen to provide security, confirmed that at a point the police had to call for reinforcement.

He said the police managed to control the deportees and persuaded them to disembark  nearly one hour after they had refused to do so.

The NADMO officials and personnel of the GlS declined to comment on the issue, while efforts to speak to the US officials proved futile.

In the first three months of 2016, about 350 Ghanaians had been deported from various countries around the world as a result of immigration-related issues.

Statistics available at the GIS show that the Ghanaians were deported from countries, including Saudi Arabia, Kuwait, the United Kingdom, Germany and Malaysia.