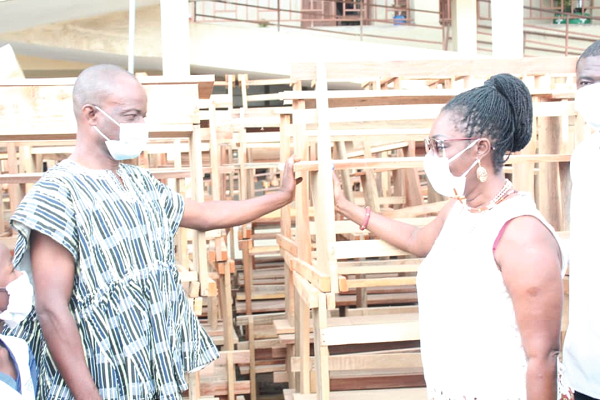 One pupil will be entitled to one dual desk to ensure social distancing in line with COVID-19 protocols.

Donating the desks at a ceremony yesterday, Mrs Owusu Ekuful , who is also the Member of Parliament (MP) for Ablekuma West, stated that education was her priority.

She said the 350 desks would complement 200 desks already donated to schools in the constituency.

The MP gave an assurance that the crowded sitting arrangement in the schools would be eventually eradicated .

“The nine basic schools in the municipality lack enough desks to practise social distancing in their classrooms and so they still sit in pairs on a desk, this 350 desks would complement the 200 desks donated earlier and help them decongest their sitting arrangement in the classrooms”, she stated

Mrs Owusu Ekuful added that education had always been her priority since she assumed office.

Consequently, she would do what it takes for Ablekuma West Municipality schools to have the best educational facilities and equipment which would help improve the educational system in the municipality.

Mrs Owusu Ekuful also gave an assurance that plans were in place for her to do more work on some of the dilapidated educational structures in the municipality which would add to the comfortability of pupils when they came to school.

“I am aware that some of our educational structures are in a bad shape and work is ongoing on some of the educational sites.

“Be rest assured that plans are also in place to start work on more facilities which will help the students to feel comfortable and learn when they are in school because education is closer to my heart, and it’s my number one priority”, she stated.

Receiving the desks on behalf of the nine basic schools, the Municipal Director of Eduction, Mr Christian Julius Aforlah, stated that the municipal education office would do its part by distributing the desks to the nine schools in order of priority as it was done in the earlier 200 desks.

“The education office is pleased to receive these desks and we hope to receive more educational equipment that will add to the smooth learning and teaching in the schools within the Ablekuma West Municipality, “ he said.

He added that education officials would do their part to make sure the desks were properly maintained.