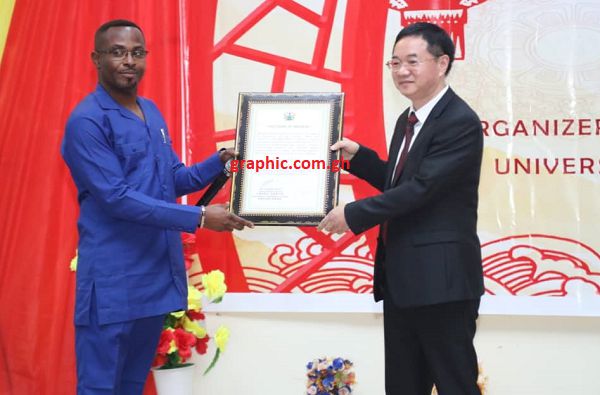 The learners are from the basic, secondary and tertiary levels of education with 14 approved training centres.

The Chinese Director of the Institute, Professor Hu Langcai who said this stated that the Confucius Institute suggested the incorporation of the Chinese language in the basic school curricula to help prepare students as international products.

He also expressed the hope that teacher education colleges would also incorporate it to help train teachers who would teach in the basic schools.

Prof Hu said in partnership with UCC, the Institute would from September this year starts a BA Chinese Language and Culture programme to expose more student to Chinese language and culture. The institute also has 23 other courses of study.

He was speaking at the third anniversary of the Institute today. The programme included a fashion show of Chinese traditional wears, performances of music and dance from China and Ghana and poetry recitals.

He expressed optimism that the Institute would help build bridges for enhanced Ghana-China cooperations.

The Central Regional Minister, Mr Kwamena Duncan, said the Chinese had become a super power largely because of self-discipline and determination, saying those were powerful traits to be emulated for growth in Ghana.

He commended the institute for its efforts at creating opportunities for the Ghanaian youth, noting that he was hopeful that the cooperation between the two countries and between the Confucius Institute and the other education institutions would be mutually beneficial.

The Vice Chancellor of UCC, Professor Joseph Ampiah Ghartey said the world today was a global village and that it was important to learn from each other and prepare as global citizens for global opportunities.

In an address read on his behalf, the Chinese Ambassador to Ghana, Mr Shi Ting Wang commended the Confucius Institute at the UCC for its immense achievement in the promotion of Chinese language and culture.

She said China would cooperate with all, including developing countries for development.