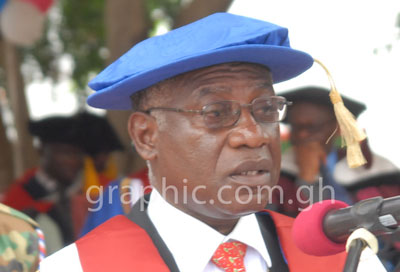 Oseadeeyo Akumfi Ameyaw IV, head of the Techiman Traditional Council, has handed over documents covering a 940 acre-land to the  Vice Chancellor of the University of Education, Winneba (UEW), Prof. Akwasi Asabere-Ameyaw, and the Chairman of the university’s Governing Council,  Nana Dr Okofo Bondam, at a ceremony at the Omanhene’s palace.

The university authorities acquired the land from the Techiman Traditional Council at Tadieso in the Brong Ahafo Region towards the establishment of a satellite campus to be called College of Distance Learning and Extension Services.

For a couple of years, consultation and negotiations had been going on between the UEW, led by the Vice Chancellor, who himself is a native of the area, and the traditional council.


The first phase of structural development of the land is expected to be completed in 12 months by Ali and Sons Company Limited.

Representatives of the two sides  planted trees at the site and cut the sod for work on the project to begin.

In a brief address, the Omanhene underscored the importance of university education in the socio-economic development of every nation, saying the council did not want children from the area to lag behind in tertiary education, hence the quick response to the request by the university.

He urged the authorities to immediately move in to start work in order to avoid unscrupulous encroachers, saying ‘‘If you fail to use it you will lose it, thereby defeating the purpose,’’ and also advised that whoever had any agricultural produce to pick from the land should do so as soon as possible to allow for the development of the land.

The Vice Chancellor and the Chairman of the Governing Council expressed their sincerest gratitude and appreciation to members of the traditional council and promised to fully utilise the land to the benefit of the people in the area and the country as a whole.