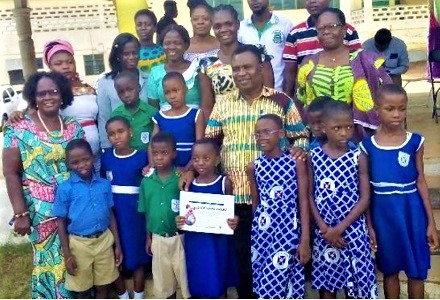 Pupils, teachers and officials of the Lower Manya Krobo Municipal Directorate of the GES after the programme
30.5k Shares

The Eastern Regional Directorate of the Ghana Education Service (GES) held a regional reading festival for Basic One to Three pupils in the region at the Oyoko Methodist Senior High School to encourage the pupils to develop the interest in reading.

The programme, which was on the theme, “Learn to read and read to learn” involved all the 33 districts and municipalities in the region.

The contestants competed in reading, spelling, word formation and pick and act.

In the Basic One division, Papa Yaw Sarpong Arthur of Akwapem South took the first position with 82 points, followed by Rejoice Akomea of Birim North with 81 points and Enock Appiah Danquah of Abuakwa South with 80 points for second and third positions respectively.

For Basic Two, Adwoa Ampofo Animwaa from Denkyembour was first with 97 points, Eunice Obeng of Atiwa had 83 points for the second position and Joyceline Afrane from Abuakwa North was third with 82 points.

Lisa Pomaa Bram from Abuakwa North took the first position with 83 points, Godwin Ofosuhene of Kwahu East, second with 77 points and Stephany Narh of Lower Manya Krobo was third with 74 points in the Basic Three divisions.

Akropong School for the Blind, which did well in the reading competition witj braille, was awarded a certificate of participation.

The Eastern Regional Director of Education, Margaret Nsiah-Asamoah, noted that reading not only had tremendous power when it came to fuelling the development of all aspects of language ability but also important to the entire human life.

She said reading could keep the minds active, hence, it was considered as one of the best habits that one could inculcate, which would lead to knowledge.

Stimulation
The Regional Director said as much as teachers in schools sought to encourage and stimulate children’s interest in reading by demonstrating that reading was fun and enjoyable, parents, guardians and the communities should equally show interest in early grade reading both in the English and Ghanaian languages.

The Eastern Regional Minister, Seth Kwame Acheampong, who was the guest of honour, congratulated the regional directorate of education for the transformational vision as the event would have a long time effect on the learners.