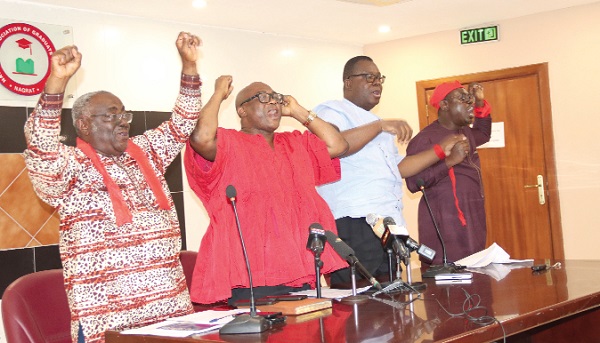 Educational activities in pre-tertiary educational institutions are expected to grind to a halt from today, Tuesday, July 5, following a decision by the teacher unions to embark on an indefinite strike.

The strike was declared yesterday by the unions after a request for a 20 per cent cost of living allowance (COLA) from the government went unheeded.

Addressing the press in Accra, the General Secretary of GNAT, Thomas Tanko Musah, said the unions had made the request to the government since February this year, yet nothing had been done in that regard.

"The loud silence of the government on this matter is worrisome and leaves much to be desired of any government that cares about its workers," he said.

He added that a deadline for the allowance to be approved, which was given to the government, elapsed last Thursday, which necessitated the strike.

"By this, we are informing the public that we are withdrawing all our services in the pre-tertiary educational space, both teaching and non-teaching staff," he declared.

Mr Tanko said most teachers and educational workers lived in a near-poverty state owing to the current economic hardship in the country.

Incessant rise in the prices of fuel, goods and services, he said, had rendered the four and seven per cent salary increments from last year insignificant.

He said inflation currently stood at 27.6 per cent, with no hope or indication of it decreasing or stabilising in the near future.

While reminding the government of its responsibility, as spelt out in Article 36 of the 1992 Constitution, the GNAT General Secretary said per that article, the government was tasked to take actions that would secure the maximum welfare, freedom and happiness of the citizens.

Mr Musah expressed displeasure at the inequalities in salaries paid to public sector workers and called for a review of the salary structure.