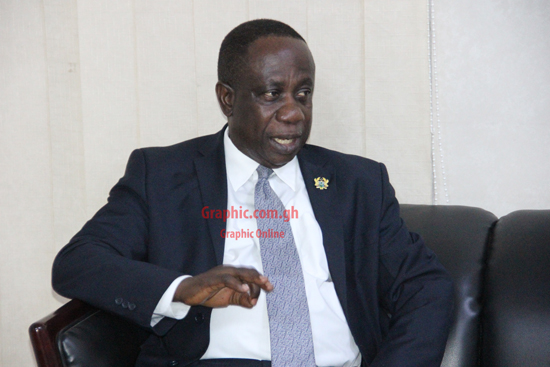 About 20,000 former beneficiaries are yet to settle their indebtedness to the Students Loan Trust Fund (SLTF) after the completion of their studies in tertiary institutions in the country.

The students, who are owing GH¢44 million, are part of the 55,000 borrowers due to repay their loans.

Out of the number, 35,000 of them have started repaying while the rest are yet to start repayment or make any plans of repayment.

To recover the debt, the Fund has embarked on an aggressive media campaign to ensure that all debtors settle their obligations to the fund.

In an interview with the Daily Graphic, the Chief Executive Officer of the SLTF, Nana Kwaku Agyei Yeboah, explained that the objective of the campaign was to remind borrowers of the importance of repaying their loans.

“Every year, tens of thousands of students who would otherwise have struggled to finance their tertiary education are given a leg up by this subsidised government facility.

“Sadly, when it’s time to repay the loans, many of them decide to default, thereby denying others the opportunity to benefit,” he said.

Nana Agyei Yeboah indicated that the campaign which would involve the use of traditional and social media would also involve meetings with employers who were bound by law to deduct loan payments at source on behalf of the SLTF.

Additionally, the campaign would be used to introduce the debtors to new and more convenient payment platforms, including the recently introduced Students Loan Mobile App.

When the Daily Graphic checked the official website of the SLTF, it observed that a notice had been put up for both new and old applicants.

The information for applicants advised them not to pay any money to anybody during the application process as it was free of charge.

On the other hand, the notice to the defaulters read: “Loan Defaulters:

The following beneficiaries of the Students Loan are due for repayment. The borrowers are in default of their monthly installments or have not started repayment of their loans.

We are therefore asking the under-listed borrowers to repay the loan in order for others to access the fund.

The Trust Fund will publish the names of these defaulters and their respective amounts in the national dailies if they fail to repay their loans on time.”

Attached to that notice is another link that sends the reader to the list of defaulters.

The Daily Graphic observed that a number of names, the institutions they attended and the courses they read had been posted on the site.

The SLTF CEO noted that the plans to start prosecuting loan defaulters this year had been temporarily put on hold due to job losses and hardships suffered by some borrowers as a result of the COVID-19 pandemic.

“The coronavirus COVID-19 pandemic has had a negative impact and has resulted in job losses and other economic hardship, thus management has decided to put on hold for this year, the proposed plan to prosecute defaulting beneficiaries for the repayment of the loans,” he explained.

The Head of Operations of the SLTF, Mr Kofi Abbew Nkrumah, encouraged borrowers who were having difficulties in repaying their loans to come forward and engage the Fund to avoid publication of their photographs and details in the national media, as well as prosecution in the near future.

The SLTF currently disburses loans to over 35,000 students in 105 tertiary institutions across the country.

The SLTF was established in December 2005 under the Trustee Incorporation Act 1962, Act 106.

As part of reforms to make accredited tertiary education more accessible to the majority of qualified Ghanaian students, the Government of Ghana passed the Students Loan Trust Fund Act, Act 820 (2011) for the efficient and effective disbursement of financial resources to tertiary students.

The Trust Fund has the responsibility to recover loans from students after the completion of their tertiary education.