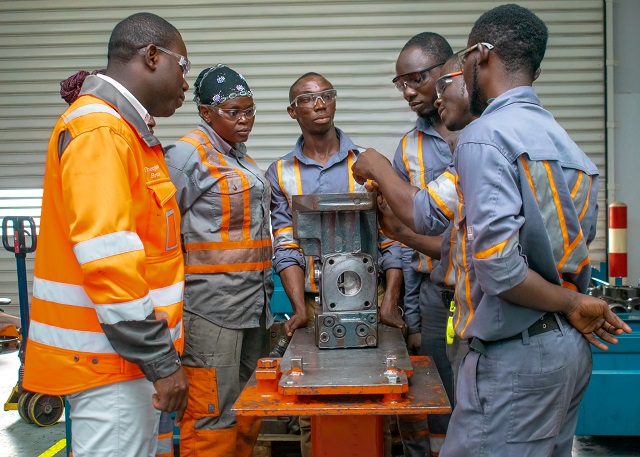 Since 2017 when the programme was initiated, 42 engineers who graduated from various universities have participated in the 12-month intensive programme and acquired skills they say are not only invaluable but also give them a head start.

Managers of Sandvik say the training programme is designed to bridge the yawning gap between academia and the world of work, and to facilitate candidates’ entry into field work through the enhancement of their hands-on skills, based on the various theories and engineering principles they learned from school.

Focused on electrical, electronic and mechanical skills, the training consists of classroom and practical sessions. The first three months is an intensive classroom sessions where trainees build upon and apply various engineering principles used in designing and building Sandvik’s modern systems and equipment.

The rest of the training period involves the rotation of the trainee through the various sections of the Company’s operations such as Underground, Surface, Workshop, both in-house and at customer sites within the West African sub-region. The key focus of the training programme is to train the graduates to fill various technical roles, says Human Resources Manager, Mr Samuel Brewu.

The beneficiaries laud the programme as an exceptionally brilliant idea that helped them visualize and bring to life, all the wonderful theories they learned in Engineering class.

A pioneer of the training programme, Mark Anthony said in a country where Engineering is more theoretical with very little practical skills, producing graduates with knowledge in Engineering but little applicability, “the programme helped me to marry the theoretical knowledge I gained in school with the practicality on the field. It also gave me the opportunity to travel out of my country not only to learn how to fix machines but also learn about other cultures and people as well, inculcating in me Sandvik’s core values which has greatly improved my performance at work.”

Mark’s training mate, Francis, said even though he graduated with a great deal of theoretical knowledge, he had very little practical understanding of what he studied, a vacuum filled when he participated in the Sandvik Mining training programme. “I completed school as an Electrical Engineer. But thanks to Sandvik, I’m now into Service. This means I do Electrical, Mechanical, Hydraulics and Auto works”, he stressed.

Two female engineers, Rashida Afranie, and Eunice Mpeniasah, who participated in the programme expressed joy in their ability to now marry theory with practice - skills they acquired over the last two years with Sandvik. They have been active in commissioning of equipment and the setting up for Automine and Optimine, amongst other duties.

Their views and experiences align perfectly with that of the other participants as summed up by Christian in the following words: “The Training programme prepared me for the job and improved my performance by connecting theory to practice and enabling a deeper learning experience. Through practical training, I have got to know how the industry (mining companies) operates, the standards and procedures to follow in the real working environment.”

Technical & Training Manager, Theophilus Bruce, said, if the outcomes of the training prove anything, it is that there is a yearning “need for our tertiary institutions to collaborate extensively with key industry players, in order to ensure that students fully benefit from internship programs run by various industries in the country.”

He said the mining industry “is largely hinged on hands-on and pragmatic application of acquired theoretical concepts from the academia to industry, hence the need to train graduate engineers and attach them to experts on the job. This invariably gives them the relevant exposure and field knowledge."

Nuhu Salifu - Vice-President for Sandvik-West Africa, who personally mentored the trainees was elated about the programme outcome and sees it to be in consonance with Sandvik’s overall vision.

He noted that Sandvik’s association with technical skills development dates back to June 2004, when the need for technicians for its projects in the Tarkwa and Obuasi catchment areas goaded the Company to get directly involved in the Western Region Traineeship programme, which, with the support of other stakeholders groomed about 239 high/technical school graduate technicians, many of whom occupy key positions in the mining and affiliate industries both home and abroad.