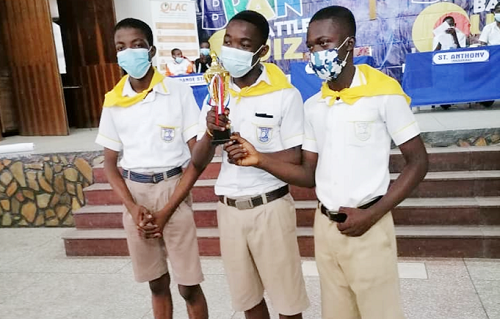 The Rev. Father Wieggers School at Nsawam has emerged the overall winner of this year’s Eastern Regional Qualifiers of the Brain Battle Quiz National Stem Championship.

The competition, which came off last Tuesday, was for Catholic schools in the region.

The contest was in Science and Maths with questions in general knowledge. It was organised by the Cocktail Media and the Catholic Education Unit.

The Chief Executive Officer of Cocktail Media, Mr Samuel Owusu-Boateng, said children of today were occupied with social media and entertainment that kept them from their studies.

“As mission schools, we are not only looking at the performances in class but we also want to develop their moral and spiritual up-bringing,” he said.

The Eastern Regional Manager of Catholic schools, Mr Jude Adjare, told Daily Graphic that the programme started two years ago but could not come off last year because of COVID-19.

“The aim is to prepare the children well for the Basic Education Certificate Examination and to help them develop the love for Science and Maths,” he said.

Assistant Headmaster of the winning school, Mr Kpabi Michael, said the pupils prepared well for the contest and thanked God that they were taking the trophy to their school.

The contestants of the winning schools, Longdon Fiifi Reginald, Braisnah Rafiu and Boamah E. Edward, thanked God for success in the contest and expressed the hope of winning the national event.