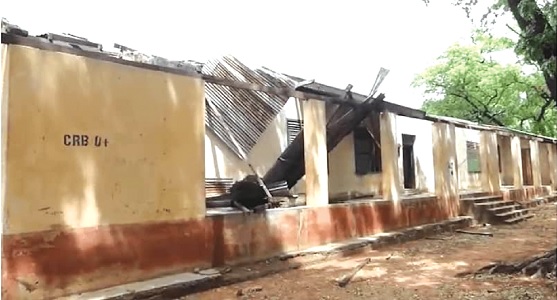 Academic activities at the Walewale Technical Senior High School in the West Mamprusi municipality in the North East Region have been halted after a heavy rainstorm destroyed portions of the school buildings.

The storm, which lasted for almost two hours, ripped off the roofing sheets of about seven classrooms, the dining hall and a dormitory block.

Aside from the buildings, learning materials and vital documents were also destroyed by the rain.

It has forced the students to study in an abandoned dormitory block, exposing them to serious danger.

The Headmaster of the school, Ibrahim Sebeyam, told the Daily Graphic that the disaster had caused serious havoc to the school and hampered academic work.

He said about 500 students were affected by the incident and they had since been moved into an abandoned dormitory block as a temporary measure.

"The building has been abandoned for a very long time and is not conducive for academic work but at the moment, we don't have any option,” Mr Sebeyam said.

“When it is raining we, have to suspend academic activities because the structure is not in a good shape," he added.

Mr Sebeyam indicated that he had written to the Municipal Education Directorate and the Municipal Assembly for support but that had not yielded any result.

He, therefore, called for the immediate rehabilitation of the damaged building to improve on teaching and learning.