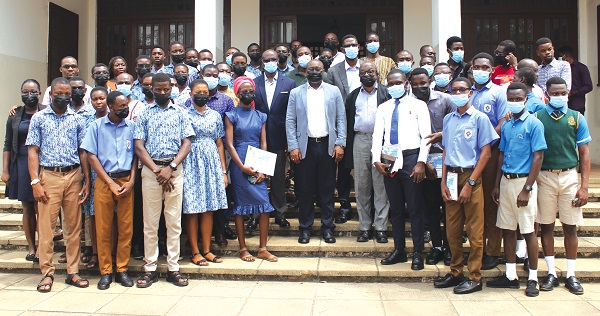 The competing schools with the dignitaries and teachers after the quiz Picture: ERNEST KODZI Follow @Graphicgh

The Presbyterian Boys Senior High School (PRESEC) emerged winner in the Geographic Information Systems (GIS) quiz organised by the University of Ghana, Department of Geography and Resource Development in Accra.

The quiz competition, which took place virtually on November 17 last year, was on the theme, “GIS for our country’s development: Lessons learnt from COVID-19”.

The award ceremony was, however, held last Thursday at the Department of Geography and Resource Development of the University of Ghana.

Celebrated every November 16 since 1999 when it was first initiated, the GIS Day commemorates the creation of the Geographic Information Systems (GIS), a spatial analytics technology used for capturing, storing, checking, and displaying data as well as creating, managing, analysing and mapping all types of data.

In all, 22 schools took part in the competition out of the 33 that registered to participate.

The competition covered general knowledge in geography, Human and Physical Geography, Map interpretation and GIS applications.
Some students of the Department also took part in a tertiary version which was more practical.

The Pro-Vice-Chancellor of Academic and Student Affairs (Pro-VC ASA), Prof. Gordon A. Awandare, lauded the department for the initiative saying, it was a good example of how individual faculties took initiative to promote innovation, mentorship and student learning.

He added that it projected and exposed the university to the general public, especially senior high school (SHS) students who were potential students of the school.

Prof. Awandare further lauded the awardees for their competitiveness as winners of the competition, adding that it was important for their success in the future.

“This is important for your future success. We are in a competitive world, so by showing your competitiveness now, it indicates that you’re strong enough to compete in the real world”, he explained.

Members of each of the three teams as well as their tertiary counterparts were awarded with certificates of participation.

Each of the three teams received a plague and a cash prize.

Kelvin Osei Akoto-Kwarteng, a member of the PRESEC team, told the Daily Graphic that his team was given a short time to prepare, which made the competition tough for them during the elimination round.

“We are grateful to the authorities for organising the competition. It was a very tough one because the time limit was very short for us to prepare for the competition”, he said.

Mr Akoto-Kwarteng, however, expressed gratitude to his teammates for their hard work and also their teachers for the continuous encouragement and support.