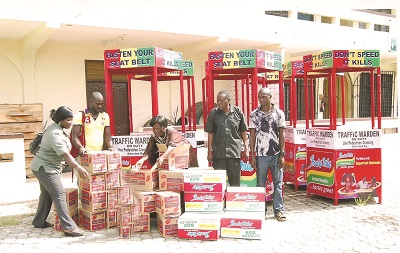 An environmental non-governmental organisation (NGO), Van-Argar Services Foundation, has mounted nine traffic direction stands at vantage points in the twin towns of Effiduase and Asokore in the Sekyere East District of Ashanti to aid schoolchildren  to cross the road without the threat of being knocked down by vehicles.

The stands would also support the Motor Traffic and Transport Unit (MTTU) of the Ghana Police Service and city wardens in their quest to bring sanity on the road and also protect schoolchildren.

According to Madam Esther Vanderpuije, the Executive Director of the NGO, a research conducted by her outfit indicated that MTTU personnel and city traffic wardens performed their duties in the scorching sun which could be hazardous to their health.

She, therefore, expressed her appreciation to Multi Pro-Private Company for sponsoring the project and also donating a quantity of Indomie Instant Noodles which were distributed to schoolchildren.

Madam Vanderpuije also disclosed that there would be Zebra Crossing markings where the shelter pads had been placed to enhance easy crossing.

The District Chief Executive (DCE), Mr Solomon Adjei Mensah, was grateful to Madam Vanderpuije and her NGO for including the district in their programme.

He advised the schoolchildren and the general public to always observe traffic regulations to forestall any carnage on the road.

The District Police Commander, C.A. Kooson, also praised the NGO for coming to their aid and added, “This will definitely motivate my men to work extra hard”.

He, however, cautioned drivers and other road users to observe road signs.