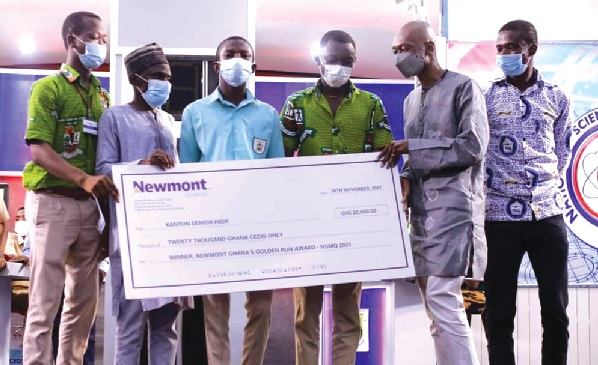 While some schools came in busloads with a large army of supporters to cheer their schools at the just-ended National Science and Maths Quiz (NSMQ), Kanton SHS did so in the old Mahindra pick up, with just five occupants made up of the three contestants, the NSMQ Coordinator and the driver.

Though they took part in the regional championships in the past, it was their first time making it to the national competition and even that, they qualified as one of the top 15 runners up.

Kanton Senior High School from Tumu in Sissala East District in the Upper West Region was kicked out in the quarter-finals stage of the competition by Chemu SHS after knocking out Apam SHS and Assin State College at the one-eighth stage.

But the Coordinator of the team, Mr Mukaila Abubakar, was happy with the performance of the team and believed that the exposure would bring attention to the school and motivate the stakeholders, particularly the old students, to support the school.

He said the team had no support from anyone and they had to rely on the school and their own effort to make the over 10 hours journey to Kumasi to take part in the contest.

Mr Abubakar said while the old students of the competing schools were coming to make donations to the contestants from their schools to motivate them to perform, they had nobody to extend a hand of support.

“Nevertheless, that did not dampen our spirits and we gave it our best,” he told the Daily Graphic.

Even though they did not win the coveted trophy, Kanton SHS went home as one of the big winners of the night.

They went home with GH¢37,000.00, four weeks educational training tour for the contestants at the Zipline Academy and GH¢5,000.00 worth of Dano Milk products for the school.

Kanton took home the Newmont Ghana Golden Journey Award worth GH¢20,000.00 for the best performing school from a deprived community, the Jacob and Elisabeth Banful Memorial award for the Most Impressive Run, worth GH¢10,000.00 for teachers of the team from less endowed school.

A GH¢7,000.00 prize from the founder of Primetime, organisers of the competition, Dr Kwaku Mensa-Bonsu, for the less endowed school that goes farthest in the competition also went to the school.

For Mr Abubakar, even though it was gratifying to pick up all the awards for the school, “getting this far has brought a lot of attention on us and the prizes will put pressure on us to do much more, to move from where we have got to now, to a higher position.

“It comes with mixed feelings and a sense of hard work ahead of us,” he said.