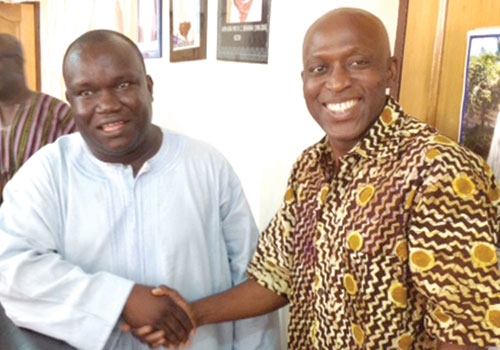 The Managing Director of the Graphic Communications Group Limited (GCGL), Mr Kenneth Ashigbey, has deplored the situation where research conducted by lecturers and students of tertiary institutions are abandoned on shelves.

That situation, he said, deprived the nation of the requisite knowledge contained in those researches which could have been used to guide policy formulation and implementation, adding that “Allowing all this knowledge to rot on the shelves is not the best and we need to explore ways of ensuring that it is publicised and utilised”.

Mr Ashigbey said this during an interaction with the Rector of the Tamale Polytechnic (T-Poly), Dr Abdulai Salifu Asuro, and other members of the management of the polytechnic as part of a five-day working visit to the Northern, Upper East and Upper West regions.

He was accompanied by the General Manager, Newspapers, Mr Yaw Boadu-Ayeboafo, the Zonal Manager for the three northern regions, Madam Mahama Memuna, and the Manager in charge of Sales and Circulation, Alhaji Hashim Amissah.

Mr Ashigbey said he was aware that a lot of research was conducted periodically by students and lecturers in the various faculties of tertiary institutions and yet little of those research materials were actually utilised.


He suggested that tertiary institutions partner media institutions to make those research findings available to the public by getting aspects of them published in a manner that readers would find interesting.

Dr Asuro lauded the suggestions by Mr Ashibgey and noted that such a move would certainly ensure that those research findings were properly disseminated and utilised by institutions.

That way, he explained, it would enable the nation to derive the maximum benefit from research.

Dr Asuro said the Daily Graphic and other newspapers of the GCGL had established an enviable niche in the industry and it was only proper that they maintained those standards.

“We have always seen the Daily Graphic as the premium and we want it to continue as such,” he said.

He noted that institutions had a phobia for the media because some media practitioners sensationalised information to the detriment of society.

“They twist information just to serve their own goals and this makes people uncomfortable in dealing with some media houses,” he said.

Earlier, Mr Ashigbey held discussions with the Manager of the Tamale Airport, Mr Michael Omane Mensah, and officers at the Air Force Command in Tamale.