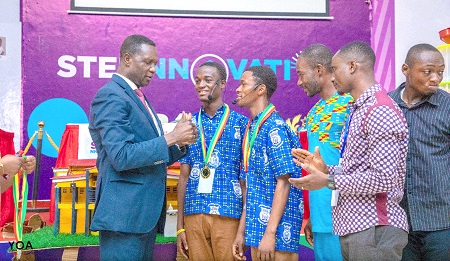 For emerging winner, Kumasi Academy took home a trophy, a laptop, a printer and a GH₵12,000 cash prize.

At the event, the Minister of Education, Dr Yaw Osei Adutwum, expressed his excitement that efforts being made by the government in the science, technology, engineering and mathematics (STEM) in schools across the country were yielding good results.

He was particularly happy that the competing schools came from across the entire country and that indicated that STEM education was catching up with all schools irrespective of location, grade and resource availability in a particular school.

The Education Minister eulogised the free SHS Secretariat (FSHS) for their innovation to introduce the competition, which aims to test what students were studying in the areas of robotics, coding and other science-related practical lessons.

He said with the enthusiasm shown by the competing schools, an effort would be made to increase the number of institutions to take part in the competition next year through collaboration with other stakeholders.

Dr Adutwum said the study of STEM was not just an academic exercise but a means to help in the effort at transforming the nation’s economy.

He was upbeat that with the study of STEM, many more critical-thinking students would be trained to help find a solution to the many challenges confronting the nation and the rest of the world.

A total of 200 schools submitted videos of their projects meant for the contest but only 97 of the schools qualified after going through vetting by the team of experts put together for that purpose.

The event, which was launched on September 5, 2022, and started on October 2022, has been held virtually since its commencement but the grand finale brought the contestants face-to-face with the judges for the first time.

Six local judges and six international judges, who have been painstakingly analysing the authenticity of the innovations of the contestants before scoring them, were in charge of the contest.