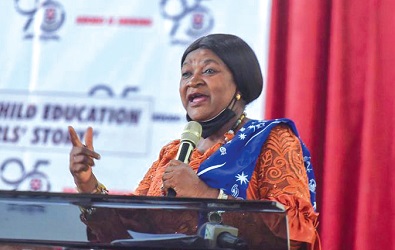 An old student of the Krobo Girls' Senior High School, Patience Diana Tetteh, has called on students to take advantage of various opportunities the current digitalisation drive offers to improve upon their skills in Information Technology (IT).

Speaking at the launch of the school’s 95th anniversary, she advised the students not to use technology to engage in social vices.

She added that the current digitisation agenda by the government provided a good platform for them to better themselves, adding that they could engage in agribusiness while in school to ensure their economic independence.

The event, which was themed, "Celebrating 95 Years of Girl Child Education For Self Sustenance; The Krobo Girls' Story", saw different prominent personalities in Ghana gracing the occasion to share their success stories with the students.

KROGISS, as it is known, was first established by Scottish missionaries in the year 1925 before it was relocated to Krobo Odumase in the Eastern Region in 1927.

The school, with its motto, “The Best for The Highest,” trains female students to be the best they could be, not only in academics but in other areas.

The headmistress of the school, Betty Aduhene Kyereboa, expressed gratitude to everyone who had continually supported the school.

She added that for the first time the school reached the semi-finals stage in the 2021 National Science and Maths Quiz (NSMQ).

The four-day celebration was marked by various activities by staff and students of the school.

As part of its celebration, the school organised a cleanup exercise in the Odumase township.

The school also visited an orphanage at Nuaso in the Eastern Region, where it donated items to the children at the orphanage to ensure their wellbeing.