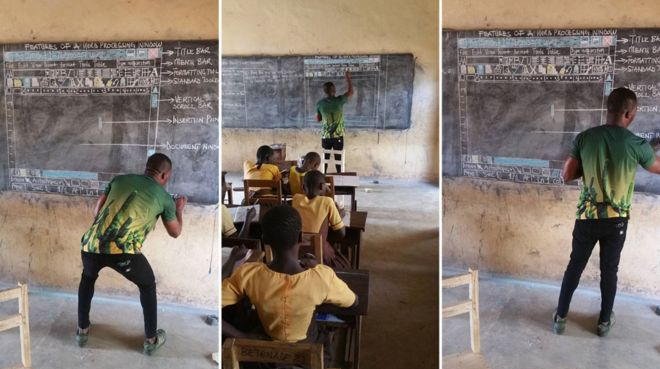 The Ghanaian ICT teacher, Richard Akoto Appiah who became a social media sensation after pictures of him drawing a diagram of Microsoft Word for his pupils went viral in March is still reaping the rewards of that selfless act

teacher at the Betenase Municipal Assembly Junior High School in the town of Sekyedomase in Ghana has been presented with a $10,000 honourary scholarship to pursue a Master's in Education degree in recognition of his innovative ways of teaching Information and Communication Technologies.

"Hard work pays. $10000 in Education Degree Scholarship. Thanks to . Aseda Nka Awurade," Akoto posted on Facebook after receiving his latest reward in the aftermath of his viral sketch on a chalkboard. 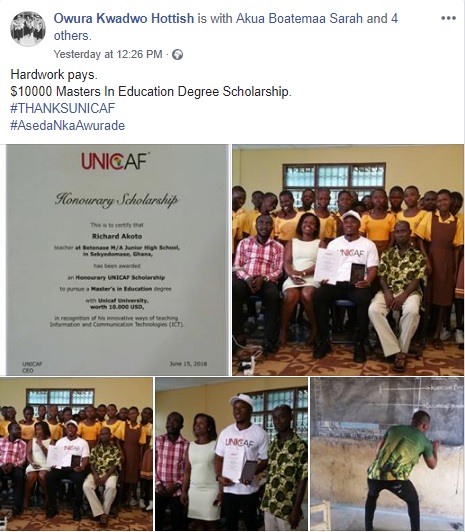 Appiah's initial post of the drawing was shared severally by thousands but Technology Entrepreneur, Rebecca Enonchong's tweet made the most impact after she tagged Microsoft.

"Surely you can get him some proper resources," she suggested.

Ultimately, her tweet landed the ICT teacher (Appiah) a trip to Singapore to attend the Microsoft Education Exchange 2018 where he received a standing ovation from his peers from around the world.

He also received some devices and software support for his students at the Betenase Municipal Assembly JHS.

He was also given access to the Microsoft Certified Educator Program (MCE) for professional development, to nurture his passion for teaching and build rich, custom learning experiences for his students.