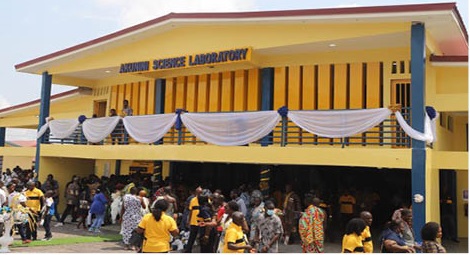 The Minister of Education, Dr Yaw Osei Adutwum, has reaffirmed the government’s commitment to flipping the science-humanities ratio from the existing 40:60 to 60:40.

He said for that reason, the President had tasked the ministry to prioritise Science, Technology, Engineering and Mathematics (STEM) and Technical and Vocational Education and Training (TVET) education.

Dr Adutwum said in the area of STEM, only about 12 per cent of Senior High School (SHS) students were enrolled in science disciplines.

“This will not enable the government to create the pipeline of students required to meet its targeted 60:40 science-humanities ratio if the status quo remains,” he noted.

Dr Osei Adutwum, who was speaking at the inauguration of a modern science laboratory of the Kumasi Academy (KUMACA) at Asokore Mampong last Saturday, said in addressing the gap, the government was expanding and retooling science resource centres to improve on science enrolment.

The government, he said, had started operationalising some STEM schools such as the Bosomtwe Girls STEM SHS, adding that others such as Diasu, Awaso, Akrodie and others would be operationalised soon.

At the tertiary level, he said the government was constructing five STEM-based universities in five of the six new regions which, upon completion, would increase science enrolment which had the potential to increase the desired ratio in the medium to long term.

Present at the event were the Ashanti Regional Minister, Simon Osei Mensah; the Municipal Chief Executive of Asokore Mampong, Kennedy Kankam, and the Nkwantakesehene, Nana Boakye Yam Ababio, an alumnus of the school, who was the Chairman of the occasion.

The rest included staff and students, as well as members of the Kumasi Academy Past Students’ Association (KAPSA-Akunini Global) who funded the project with support from other corporate institutions.

Dr Adutwum lauded the old students (Akunini) for constructing such a laboratory to facilitate the teaching and learning of Science in the school.

“This ultra-modern laboratory will play a strategic role to support the government’s agenda 60:40 science-humanities ratio,” he acknowledged.

For his part, the President of the KAPSA-Akunini Global, Okunini Dr Kwabena Dapaah-Siakwan, said the initiative to carry out the project started in 2012 when KUMACA organised a homecoming ceremony.

The “Akunini Science Laboratory”, he said, was named after the past students of the school affectionately called Akunini, a Twi word meaning academicians.

The inauguration was on the theme: “Where there is a will, there is a way”, an English translation of the school’s motto: Vouloir Ces’t Pouvoir.

The Headmaster, Samuel Gato, said with the increasing number of over 3,500 students, the need had come for the school to get a spacious dining hall, adding that students now accessed the hall in batches to eat their daily meals.

That notwithstanding, he commended the government for recently constructing and handing over additional dormitory blocks to the school, which he admitted had drastically reduced congestion in the various boys’ and girls’ dormitories.