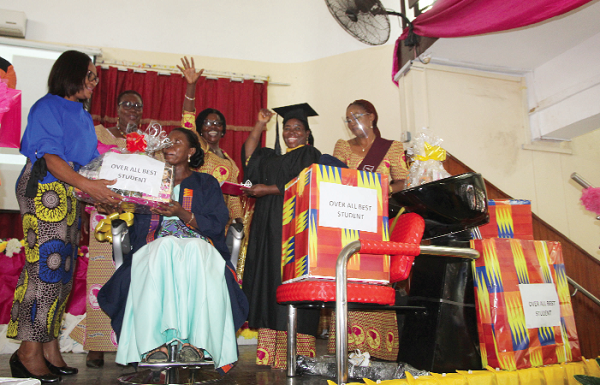 The government, through the Ministry of Education, has set aside $200 million to support apprenticeship starting from 2021.

According to a Deputy Minister of Education, Mrs Gifty Twum Ampofo, 75 per cent of the amount would be used on apprenticeship training, while the remaining 25 per cent would be used to support persons to set up their businesses after successfully undergoing the training.

Speaking at the 16th mass graduation ceremony of the Ghana Hairdressers and Beauticians Association (GHABA), Greater Accra branch, last Wednesday, the deputy minister said the initiative was going to be under the Ghana Jobs and Skill Development Programme.

“I am not saying this money is in the pipeline. Parliament has approved, World Bank has approved and all we are waiting for is the year 2021,” she said.

The graduation ceremony, which was on the theme: "Ideal Professional Identity: the key to grooming and perfection of beauty in the 21st Century", had 136 apprentices who successfully passed through various written and practical apprenticeship training across the Greater Accra Region, graduating.

The Greater Accra Regional President of GHABA, Ms Bernice Asantewaa Asantey, in her address, indicated that advancement in technology and innovative techniques in their services had given stylists the opportunity and liberty to pursue new avenues of creativity and service for their clients.

She indicated that in line with its objectives for the 21st Century, GHABA Greater Accra would be upgrading its NVTI, TVET, COTVET certificates to make the trade more attractive to graduates from senior high schools and tertiary institutions both in the country and within the West African sub-region.

" For our approach to the 21st century, GHABA Greater Accra will be upgrading our NVTI, TVET, COTVET certificates to make our trade more attractive to graduates from senior high schools, polytechnics, universities and colleges in the ECOWAS sub-region," she said.

Ms Asantey also explained that upgrading the certificates was also going to help create more jobs in addition to about 8,000 professionals who were currently in the profession across the country.

She appealed to the government to support GHABA with tools, equipment, logistics and an enabling environment to improve the profession and create more jobs in the country.

The Greater Accra GHABA president added that members of the association were going to be at the forefront of disease prevention by delivering their services with certified products in healthy environments as they played their part in promoting good health among citizens.

Ms Asantey also admonished the graduates to be professional and treat their clients with respect as they were key to the success of their business.

She urged them to always seek to upgrade their skills for personal growth and development, stressing that technology “had made that possible now.”

Ms Asantey further advised the graduates to use modern cosmetics and nourishers as they are healthy, environmentally- friendly and from accredited manufacturers," she added.

The association, which currently has over 8,000 professional members, became the first to join the informal sector of the Industrial and Commercial Workers Union (ICU).