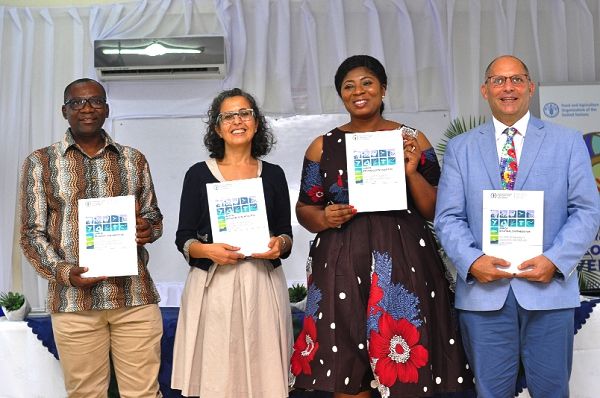 The Ghana Institute of Journalism (GIJ) has expressed readiness to partner the Food and Agriculture Organisation (FAO) of the United Nations to develop a course content on environment to make its students and media practitioners in the country more environmentally conscious.

The partnership, according to the Vice Rector of the School, Dr Modestus Fosu, who was reading a speech on behalf of the Rector Professor Kwamena Kwansah-Aidoo yesterday, at a ceremony to mark this year’s International Biodiversity Day at the school, would equip the students of the institute with the needed knowledge on biodiversity and on how to communicate on issues relating to the environment.

The event was held on the theme: “Our biodiversity, our food, our health”.

The theme aims to leverage knowledge and spread awareness of the dependency of our food systems, nutrition and health on biodiversity and healthy ecosystem.

The event was also used to launch the Africa Regional Synthesis for the State of the World’s Biodiversity for Food and Agriculture Report.

The report addresses the biodiversity for food and agriculture found in plants, animal, aquatic and forest production systems and the ecosystem services associated with them.

Dr Fosu said issues about the health of the country’s sustainable biodiversity should be a subject of concern to the academia, adding that GIJ as an academic institution stood in the right position to provide the required training to guide communication activities relating to the country’s environment and its flora and fauna.

The course on biodiversity, Dr Fosu explained, would not only equip the learners with adequate knowledge on biodiversity and its implications on life and health, but would enhance news reportage on issues affecting biodiversity to the understanding of the ordinary people on the streets.

The Chairperson of the 60th anniversary celebration of the Ghana Institute of Journalism, Dr Lawrencia Agyapong, said the GIJ collaborated with the FAO to celebrate this year’s International Biodiversity Day as part of activities marking the institute’s 60th anniversary.

She explained that “this collaboration is part of our partnership with the FAO in promoting the role that journalists and communicators can play in creating awareness on biodiversity as a key catalyst to transforming food systems and improving human health”.

On the concept of One Health, which is an approach to designing and implementing programmes, policies, legislation and research in which multiple sectors communicate and work together to achieve better public health outcomes, a Senior Animal Health and Production Officer of FAO, Dr Scott Newman, in a presentation said human beings shared natural resources such as food and water with other species and, therefore, the welfare of all other species must be of greatest concern to mankind.

According to him, the areas of work in which a One Health approach was particularly relevant included food safety and the control of diseases such as flu and rabies that could affect both animals and humans.

For her part, a Senior Forestry Officer of FAO, Mrs Nora Berrahmouni, expressed concern that biodiversity “is declining” globally due to several factors, including human actions.
She charged media practitioners and student journalists to create awareness on the need to protect the environment.