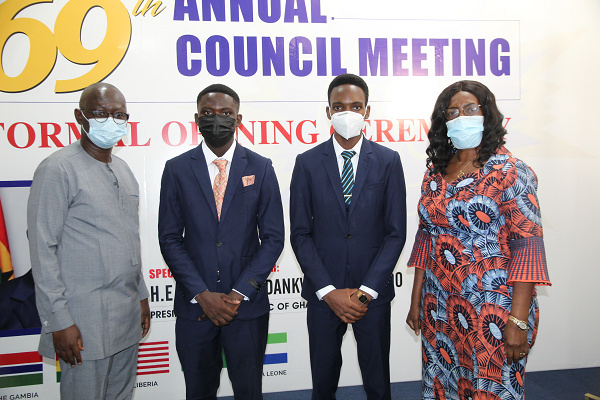 Master Cecil Tetteh Kumah formerly of Mfantsipim Senior High School was adjudged the Overall Best Student in the 2020 WASSCE written by over two million candidates from the five participating countries.

Master Kumah is currently with the Columbia University in the USA studying Mechanical Engineering and Computer Science.

For topping the West Africa, Master Kumah was presented with a cheque for $1,500.

The second Overall Best student went to Mr Godfred Aseda Obeng from Hope College at Gomoa Fete. He is currently with the University of Ghana.

Miss Ansah, who is currently studying at the Cornell University, USA, took home $900.

The Distinguished Friend of Council Award was presented to Dr John Anum Sackey, a former Senior Lecturer, Department of English of the University of Cape Coast and Central University as well as a Chief Examiner, Literature in English and Oral English.

For his award, he took home a plaque. 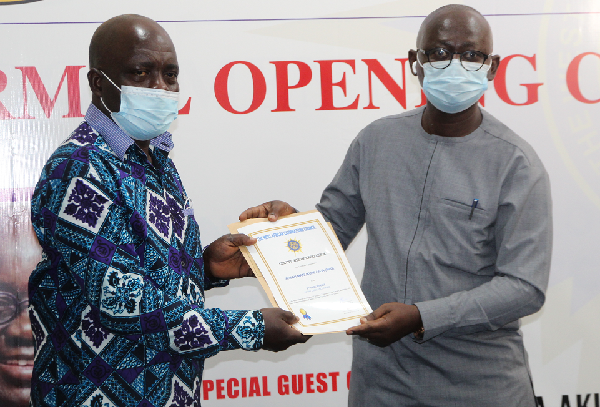 He urged prospective candidates in the region to learn from the success chalked up by the three.

President Akufo-Addo further lamented on the high level of examination malpractices, particularly the leakage of examination questions, saying that the menace must be of concern that needed immediate attention.

That, the President noted, hindered quality assessments, adding that it erased the public confidence in the examinations by the council.

He, therefore, called for comprehensive measures to be put in place to curb the practice.

President Akufo-Addo gave an assurance that "the government is working with WAEC to help curb examination malpractices in Ģhana."

According to him, that would ensure that Ghanaian children became competitive and also maintain the integrity of the examination administered in the country.

Prof. Kwasi Opoku-Amankwa (right), the Director-General of the Ghana Education Service, presenting a plaque or an award to Dr John Anum Sackey (left), Distinguished friend of the council of W.A.E.C.  Picture: ESTHER ADJEI

For his part, the Chairman of the Council, Mŕ Baboucarr Bouy, commended Ghana for promoting the work of the council and education in the sub-region.

He also called on other governments to invest in the council's in their various countries.

Mr Bouy emphasised the need to help curb examination malpractices in the region.

Master Kumah and Master Obeng were grateful to God for how far He had brought them.

Criteria for the award

The criteria for the award is opened to only candidates with a minimum of eight Grade A1s at one sitting, without any hint of impropriety.

The raw scores of the eligible candidates are converted to T-scores and used to rank the candidates.

In the event of time, the T-scores of the candidates in their common subjects (English and Mathematics) are used.