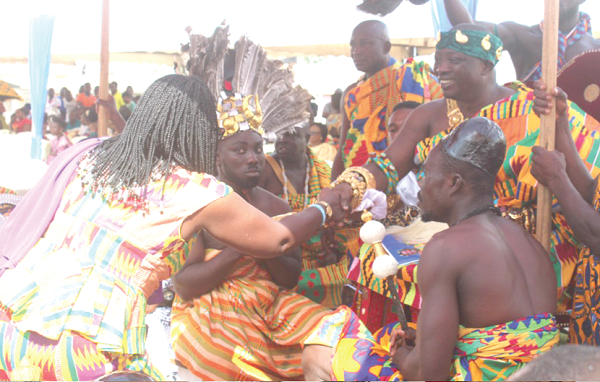 The Fiapre Traditional Authority has established the Fiapre Education Endowment Fund (EEF) to support educational activities in order to promote and sustain quality education in the area.

The fund would be used as a wheel for the mobilisation of resources to finance the construction of the proposed Fiapre Community Library Complex and Information Communication Technology (ICT) Centre to serve learners in the community.

In addition, the fund is expected to support brilliant needy students in the area.

The fund was set up during the durbar of chiefs and people of Fiapre to mark the education festival and the fifth anniversary of the enstoolment of chief of the town, Obrempong Professor Kyem Amponsah.

Located in the Sunyani West Municipality in the Bono Region, Fiapre has a population of about 21,000.

The institutionalisation of the fund, led by Prof. Kyem Amponsah II, who is also the Vice Chancellor of the Ghana Communication Technology University (GCTU) in Accra, was part of the chief's preparedness to make Fiapre the educational hub of the Bono Region.

The fund received a major boost when the Minister of Employment and Labour Relations, Ignatius Baffour Awuah, who is the Member of Parliament of the area, made an initial donation of GH¢100,000 to support the chief's vision.

Again, the fund had several donations from individuals, institutions and organisation during the fundraising ceremony.

First of it kind

The celebration of the education festival, instituted by the Fiaprehene, is the first of its kind in the country.

It was held on the theme: "Promoting and Sustaining Quality Education, the Legacy of a Progressive Chief".

Speaking during the durbar, Prof. Kyem Amponsah II said he established the fund and instituted the festival to enable the current and future generations appreciate the importance of education.

He said the accruals from the fund would be used to facilitate the construction of the library complex and an ICT centre since the town was gradually becoming the education hub of the Sunyani West Municipality and the entire region.

Prof. Kyem Amponsah explained that it was at Fiapre that both the Catholic University and the University of Energy and Natural Resources (UENR) are located.

In addition, the community also had several senior high schools and 11 basic schools, while the town had also been selected as a site for one of the 10 Science, Technology, Engineering and Mathematics (STEM) schools been built across the country.

He said education was crucial in society because it abolished superstition, prevents diseases, fizzles out ignorance and frowns on poverty.

Prof. Kyem Amponsah said the authority had for the past few years found financial support by way of scholarships for some brilliant needy students.

For her part, a Deputy Minister of Education in charge of Technical, Vocational Education and Training (TVET), Gifty Twum Ampofo, said the results of the 2022 West African Senior School Certificate Examination (WASSCE) were the best in the last eight years.

She said the result again demonstrated that the free senior high school policy introduced by the government was of quality.

She said besides the introduction of the free SHS policy, a no guarantor students’ loan policy had also been instituted to bring relief to parents whose children sought loans from the Students Loan Trust Fund (SLTF).

Madam Twum-Ampofo said the government was equally investing heavily in TVET education to provide students with employable skills and made them globally competitive.

She said the ongoing construction of the 18-unit classroom block for the Fiapre Community Junior High School was about 40 per cent completed.

For his part, Mr Baffour-Awuah pledged to support the chief's vision to improve education and make the community a hub of education in the region because he shared the same vision with Prof. Kyem-Amponsah.

He, therefore, promised to support any chief in the constituency who would initiate similar educational programme.